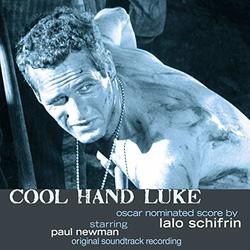 Composer Lalo Schifrin might be better known to the current generation of young moviegoers as the guy who wrote the "Mission: Impossible" theme.  But this six-time Academy Award nominee has a much broader palette than people may know.  He's also a renowned classical and jazz composer.   His personal record label, Aleph Records, has been releasing many of his new albums (including "Esperanto" and "Brazilian Jazz"), as well as digging back into the archives to release older soundtracks that might have been forgotten.  Recently, they released his score to the "disaster" movie, Rollercoaster.  The Steve McQueen classic Bullitt, and his Academy Award nominated score to The Fox.  Now, continuing this impressive streak of score releases, Aleph Records has released Lalo's Academy Award nominated score to Cool Hand Luke.

Long considered an excellent score (and one of Lalo's best), this release of Cool Hand Luke is by far the best release of the score to date.  Previously released (on LP and the later on CD) as a 31-minute album, this new score has been somewhat remastered (there is still a bit of hiss present, but the album is just a bit "loud", so turn your volume down a tad to make it more enjoyable) and has given us an additional 26-minutes of music.  Lalo's mixture of bluegrass and symphonic music resulted in a unique and satisfying sound.  From the distinctive "Main Title" theme to the highly energetic (and Copeland-esque) "Tar Sequence", the first five minutes alone on the album are enough to give one the clear indication that this is no ordinary score.

"Just A Closer Walk With Thee" is a great jazzy number that you can almost hear the words to - right up to the "amen" at the end.  Tense percussion and dissonance accompany "The Chase", hinting at the work Lalo would do later on with the Dirty Harry films.  A smooth European rhythm in "Lucille" works its way to the blues in "Arletta Blues".  Appalachian banjo mixed with full orchestra in "Criss-Crossing The Fence" is followed by the more reflective "Plastic Jesus".  To say that this score is versatile is a complete understatement.  "The Ballad of Cool Hand Luke" is a standout track, and actually had slightly better fidelity than the rest of the score. The "End Title" is a reprise of the "Main Title", but with a punchier ending.

But the album doesn't stop there!  Now there's a new suite, "Symphonic Sketches of Cool Hand Luke".  Running about 7-minutes long, it covers most of the main themes from the film, but as performed with a full orchestra.  It's the type of suite you would most likely hear performed at concerts, and it's a nice bonus to the album.  Hang on, though, because we're not done!  Now there's a "symphonic version" of "Down Here On The Grown", which is the main theme from the film.  More jazzy and upbeat than the previous "Sketches" cue, there's plenty of improvising, and it's a great way to end the album.

I can't help but recommend this album.  If you are unfamiliar with Cool Hand Luke as a film, go rent it - it's a great film.  You'll see for yourself how wonderful Lalo's score is, and then I'm positive you'll rush out and get this album.  As for those folks who have already seen the film (and therefore know how good Lalo's score is), you probably already have the original soundtrack release. But that old LP or CD is as good as a coaster (or a platter, if the LP is what you have) - go get this new release. It's filled to the brim and guaranteed to satisfy.