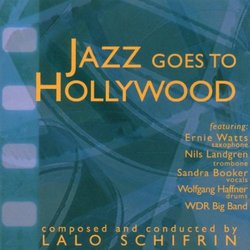 by David A. Koran May 11, 2000
4 / 5 Stars
If there was a more descriptive an accurate title for an artist and their contents located on a recording therein, Lalo Schifrin's Jazz Goes To Hollywood would fit the bill to a "T". As a well respected jazz composer and musician long before his foray into writing music for films, Lalo gets to demonstrate his roots and influences for his film scores. Presented here from Schifrin's own label, Aleph, we get a small sampling of those jazz influenced score through memorable selected cues, fourteen in all, for a rather enjoyable listen.

Like the film music concert replayed over the past several months on BET Jazz in the US, this is taken from a similar live concert on October 16, 199 in Cologne Germany. If you haven't seen the concert on T.V., I highly recommend it. It is a great expose of Lalo's talent as a conductor, composer, and musician. Like that T.V. feature, the album provides the same kind of insight but without the moving pictures. The key thing to note, mainly because of the title, is the use of jazz and jazz-styled music and songs for many of Lalo's scores. Of course there have been other more risky applications of music for Mr. Schifrin, including orchestral pieces like The Four Musketeers, electronics in George Lucas' THX-1138, and the memorable funkfied Enter The Dragon. This Brazilian born composer, like his French counterpart, Maurice Jarre, can cover any musical style, orchestration, and theme with perfect ease. And that is reflected he, once again, in this recording as well as the several previously released by Aleph.

For those wanting true to the soundtrack renditions of cues, you'll be sadly disappointed, but if you do like to hear live arrangements, competently done, then this is your album. It has a few very well know pieces, such as vocal arrangements for Cool Hand Luke ("Down Here On The Ground" and The Cincinnati Kid (which I can relate to) and the instantly recognizable theme from Mission: Impossible. The latter I remember being performed by Lalo himself on piano while also conducting the orchestra, like he does on the album, in the BET presentation mentioned earlier. This is where you can see (and hear) Lalo shine as the musician, when he plays the opening melody with his lone left hand very adeptly. With The Cincinnati Kid introducing the first Steve McQueen/Schifrin film pairing, we also get the theme from my second favorite McQueen film (The Great Escape is number one on that list), Bullitt. I think this is one of the best examples where a theme written to give a "background" and "attitude" to a character without narration or direct presentation made the character in the film better, but enhanced the movie enough to make it a classic, even if it's somewhat dated.

I've listened to this album a number of times even when I wasn't sitting down planning for the review, and found it an enjoyable "atmospheric" CD to leave on either in the car or at home. Cruising through town, notably Los Angeles now, with some of Schifrin's jazz coming out of the speakers can make you forget the much talked about traffic the region is known for. Hey, and it's still great music on it's own, and along with Ennio Morricone's Cinema Concerto: Live At Santa Cecilia released earlier this year, can count as some of the best film composer "concert" CDs released in the past decade. I could hope that a few other composers may take their show on the road an produce a few other live recordings in this manner. It's a nice treat now again for the good ones!