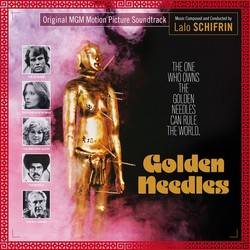 In order to celebrate its 50th CD release, Music Box Records is very proud to present the original soundtrack from Golden Needles (1974) by Lalo Schifrin.

Golden Needles was directed by Robert Clouse, who brought along composer Lalo Schifrin from their last successful collaboration, Enter the Dragon. The music is the perfect accompaniment for the east-meets-west scenario and in many ways, it can be viewed as the close cousin of Schifrin's incredibly influential soundtrack for Bruce Lee's last film. Featuring cool percussion, infectious jazz licks, epic action set pieces and even a tender love theme for the unlikely romance of Dan and token femme fatale Felicity, Schifrin's music for Golden Needles is as great as it is largely forgotten in the shadow of its more esteemed peer—at least until now.

This CD by Music Box Records marks the premiere release of Golden Needles. The only piece of music that has been released from the film was a re-recording on Schifrin's 2000 compilation album Jazz Goes to Hollywood. This soundtrack presents all the music in mostly chronological order and is accompanied by an 8-page booklet with liner notes by Gergely Hubai who discusses the film and the score. Golden Needles may lack the name recognition of Bullitt or the cult factor of Enter the Dragon, but the score definitely delivers everything you'd expect from the composer at the top of his game—and it certainly doesn't disappoint fans of Schifrin or martial arts movies in general.