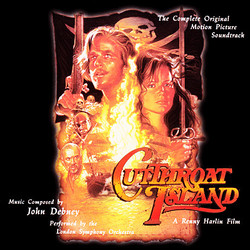 My first exposure to Debney's epic masterpiece CutThroat Island was when it was used in the trailer to The Mummy Returns. I immediately bought the soundtrack afterwards. Following my first listen, I found myself almost breathless, such was the shear energy of the London Symphony Orchestra's performance. Today, John Debney's CutThroat Island remains one of the best scores ever written. Renny Harlin's adventure film was a box-office failure and easily forgotten, but Debney's music was not - and Prometheus Records' new two-disc release will help ensure that.

One minor disappointment with this release is that the additional 40 minutes of previously unreleased score actually slows the album down. Much of the music is great and it is a welcome addition to any fan's collection, but the original release was edited in such away that the furious performance never let up. The complete score now fleshes out some of the time between cues, and it does provide a better listening experience so the development of the music can be better appreciated. But don't worry, the energy is still very apparent.

The new release contains a few odd cues that were not composed by Debney. "Purcell Snatcher" is a little waltz cue by Brad Dechter, and "The Wedding Waltz", which opens the second disc, was orchestrated by Debney (no one remembers who really wrote it) for Renny Harlin's wedding to Geena Davis and uses a bit of the CutThroat Island theme. The second disc also includes 35 minutes of bonus material, a couple cues without the chorus, which showcases some of LSO's performance very well, and the original synth demo of the opening cue. This track is fun because it shows how far synthesizers have come since 1995. It sounds like Final Fantasy game play music, but shows Debney's original thoughts before they were sent over to London.

There is little reason to mention any particular tracks because many people know this score and if you don't...you should! Now is your chance. The finale cue has been expanded into an 18 minute track, "The Battle/To Dawg's Ship/Morgan Battles Dawg/Dawg's Demise/The Triumph" that makes my prior complaint of a slower album insignificant. Debney's score defines the term "swashbuckling" and his use of the orchestra and wordless choir together adds a great depth to the music. I wish Debney would take on some larger projects like this because CutThroat Island shows off his talents. This album is definitely worth looking into, even if you already own the original release.