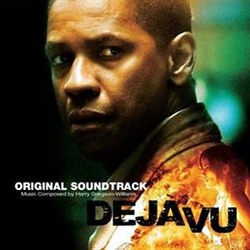 After an epic year in 2005, Harry Gregson-Williams has not had a score soundtrack release since his highly successful score to The Chronicles of Narnia: The Lion, The Witch and the Wardrobe. While he has been busy, some projects just take longer than others to be released. His latest score reunites him with Tony Scott, who he has previously worked for on Enemy of the State, Spy Game, Man on Fire, and Domino. Their latest film, Deja Vu, returns Scott and Gregson-Williams to the tone of their first two films together with a technological espionage twist on things. One thing to note about this soundtrack album is that two tracks are mislabeled and should be flipped: "You Can Save Her" and "Humvee Chase". I will refer to them the way they should be labeled, as it will make more sense with the nature of the cues.

While Kingdom of Heaven and Narnia are two of my favorite scores, Gregson-Williams' fusion of electronics and ethnic music in Spy Game comes in close behind them. With such impressive works under his belt, I find Deja Vu to be a simpler score. It is very functional and perfectly appropriate for the film, but lacks the depth of Spy Game and Kingdom of Heaven. The main theme is introduced as a meandering string line in "Algiers Ferry" over light electronic percussion. Unfortunately, the composer's chance to develop the opening sequence into a powerful cue was taken away by the use of "The Saints Go Marching In" as source, but the score returns in "Aftermath". After a quiet beginning, moving metallic percussion pick up the pace and the strings continue to dominate with a bit of electric cello toward the end.

The other main theme for Claire is introduced in "Claire's Apartment." This theme is performed primarily on piano and harp and sounds a bit like slower parts of Gregson-Williams' Narnia score. "You Can Save Her" (improperly labeled "Humvee Chase" on the album) opens with this theme as well. The final appearance of the theme is in "Claire's Rescue" and gets a bit of time in the strings as well as it is developed a bit further. Generally, the score is limited in orchestration to the strings, piano, and electronic percussion, but a few brief spots of brass come in, like in "The Hideout."

The major action cue, "Humvee Chase" (mislabeled as "You Can Save Her") is nearly all electronic and brings Gregson-Williams back into his Tony Scott mode with a rhythm very similar to that in "Red Shirt" from Spy Game. The theme is heard in small doses over the beats. Like with Spy Game, we get a remix of this track at the end of the disc, which is good for techno dance parties, but little else. Macy Gray's song, "Coming Back to You", was co-written by Gregson-Williams and is performed to bits of the score's themes. It is a decent song, but I'm still not a huge fan of Gray's voice. In all, Deja Vu worked great in the film and fans of Gregson-Williams' action/thriller scores will like it.