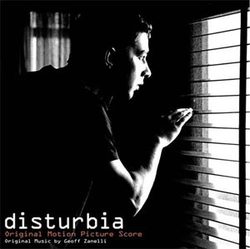 It is fair, but not necessarily complimentary, to say that Geoff Zanelli's score for Disturbia is perfectly suited to the film. Despite its box-office success and the every-guy likeability of its star, Shia LaBeouf, the film is ultimately forgettable and, similarly, Zanelli's music gives us little to hold on to. The mood of the tracks is as wildly varied as the tone of the film itself, which veers between creepy Hitchcockian thriller, sweet coming-of-age romance and wacky screwball comedy. It's hard to know, therefore, who makes up the target audience for this release – the lighter, more romantic tracks are too saccharine for the thriller fans, but the album is dominated by indistinct and often lengthy thriller cues.

It's a shame that the album doesn't work as a whole because some of its parts are quite enjoyable. "Fishing" contains some lovely lilting clarinet work to accompany the film's opening sequence, set against a picturesque rural landscape. It establishes a clear, pleasant orchestral theme that is only reiterated in fragments as part of the love theme. It's disappointing that this theme isn't developed more clearly, as it could have given a greater sense of unity to this episodic, disjointed film.

"Voyeurism" is also a lovely track, conveying a sense of our hero's desperation to be noticed by his attractive new neighbor, its underscore of arpeggios marking the oppressive presence of time. And as far as the poppier tracks go, "Walking Ashley Home," which serves as the basis of one of the songs featured in the film (This World Fair's "Don't Make Me Wait"), is a standout. Its gentle, indie-pop stylings are nicely understated and serve as a strong, if all too brief, musical link between the songs and the score. The electric guitars of "Poofoot" and "I Like To Play," however, already sound dated. The first half of the latter is particularly cheesy – the kind of thing you'd expect to hear as a theme song on an early 90s teen-oriented TV drama.

The rest of the album is a fairly uninteresting blur. While the thriller elements of the score sustain an appropriate level of suspense and contain all the requisite jolts, there's very little to differentiate the material from dozens of other modern thriller scores. The absence of distinguishable themes doesn't help in this regard. The last three tracks, which total almost nineteen minutes, offer very little light and shade. "The Basement Graveyard" is a particularly disappointing end to the album, trailing off in its dying minutes to a barely audible drone.

This is a release to be recommended only to avid fans of the film, and even then with some reservations.