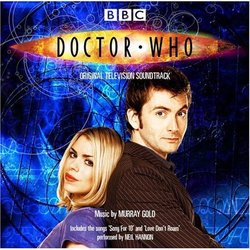 With Star Trek waiting in the wings for a new lease on franchise life, it is heartening to know that the venerable Doctor Who is back in business and still satisfying critics and fans alike. With the new series, now in its second season, airing in the UK and US, fans on both sides of the pond have been able to enjoy further adventures of the idiosyncratic Who. And not only does the indelible Ron Grainer main theme return, but it is now augmented by excitingly varied music from Murray Gold.

A brief version of the main theme opens the lengthy album, embellished by a fuller orchestral sound and driving snares, while the melody itself is still essayed by high pitched synth. This is followed by one of the first new action highlights, "Westminster Bridge", in which a rapid pop backbeat and 60\'s guitar theme propels the brass and strings, all in the fashion of David Arnold\'s Bond scores. The Who theme is then revisited by solo female vocal, in a distant yet seductive manner. As an example of the aforementioned variety in these tracks, "Cassandra\'s Waltz" features a quirky theramin-esque effect doubled by piano, the swaying, 3/4 tune progressing into full orchestra in a manner not unlike Elfman. Later for further variety, rich, large-scale choral textures are effectively added to the orchestra in such tracks as "I\'m Coming to Get You", "Hologram", "Rose Defeats the Daleks" and "The Lone Dalek", the last of which is particularly expressive and evocative.

There are also some lovely, tender thematic material included, such as in "Rose\'s Theme" and "Madame de Pompadour", the latter more bittersweet and one of the best tracks on the album. Propulsive orchestral action comes in the form of "Slitheen", the raw and percussive "Tooth and Claw" and the exotic flavor of "New Adventures". The expansive choral and orchestral combination reaches its zenith in "The Daleks", during which a chanting choir provided the persistent, driving force for the cue, cresting into a resounding conclusion. Dark tonalities are explored in "The Cyberman" and its descending lines soon lead into an urgent ostinato, punctuated by angry brass and a surprisingly major key finish.

Another dash of variety is supplied in "Doomsday", where a hypnotic mix of wordless female vocal, pop backbeat and guitar jam beneath an earnest, sorrowful cello solo. The last two score tracks, "The Impossible Planet" and "Sycorax Encounter", move from a dreamy, meditative state into one of a heavy, threatening dirge-like manner. The album version of the Doctor Who theme is a riveting, near heroic expansion on the material, with bold horn calls and driving strings and snares charging forth. Also included here is a pair of songs composed by Gold and performed by Neil Hannon, of The Divine Comedy - the toe-tapping. upbeat "Song For Ten" and the more swaggering, brassy "Love Don\'t Roam".

You do not have to be a fan of Doctor Who or Murray Gold to enjoy much of this release, where the scope and scale, action and adventure, fun and style offer something worthwhile for many film score fans. Even with its lengthy running time, each track features memorable melodies, instrumentation or excitement, without really any zoning-off spots.