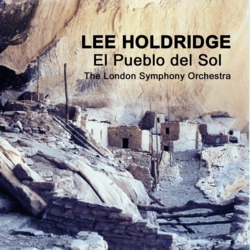 Dragon's Domain Records, to be distributed through buysoundtrax.com, presents the soundtrack release of El Pueblo del Sol, featuring music composed by Lee Holdridge (The Beastmaster, Splash), performed by the London Symphony Orchestra. El Pueblo del Sol, a 1983 documentary film, captures not only the visual delights of Mexico but also grasps the day-to-day life of a people in a land filled with future promise.


Upon completion of the film, the producers chose to commission an original score. Producer Ricardo Sanchez Guadarrama approached Lee Holdridge to score the film in the fall of 1981. Upon first seeing the movie, Holdridge felt that the score should be approached as a dramatic symphonic tone poem for the orchestra that would capture the natural beauty, history and traditions of Mexico.