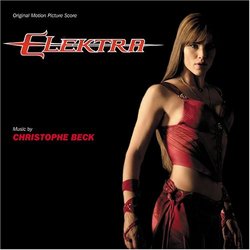 Graeme Revell's score for Daredevil was functional and provided a consistent theme for the blind hero in-between the numerous rock songs that filled the movie. The Crow composer was a good choice for the dark soundscape that the film required. Two years later, Jennifer Garner comes back to life in Elektra, which is just barely a sequel to Daredevil. This martial arts infused action film needed a very different sound from the first film, and "Buffy the Vampire Slayer" composer Christophe Beck was brought on to provide it.

Beck wanted a different sound for the score and experimented with the orchestra to create a wide array of rhythmic effects. Most of the percussion in this score is electronic - or backed by electronics to the same effect ("DeMarco's End") - and much of the brass is also used as a percussive effect with staccato bursts. This, mixed with all the other experimental rhythms and instrumentations, basically melds into a very confusing slew of music that, for one album, is very difficult to listen to. For example, in "Escape from McCabe's", the music builds, stops suddenly, then explodes back into action. This silence may have had a place in the film, but is very harsh on the ears. Some of the action music, however, is well done, as in "Wolf Run".

My biggest frustration with Beck's score for Elektra is that it has the wrong feel for the film. First and foremost is the main theme, which is introduced in the "Main Title". It is a bold, yet restrained theme played by the French horn and is a very good theme for Elektra - but then it is basically absent from the music until the end. It gets a more expanded treatment in "Elektra's Second Life" and only reappears during the meat of the score with minor appearances in "Insomnia" and "Typhoid". While Elektra was different from other Marvel films, it is still a hero film and a main character theme as good as Beck's should have had a more prominent place in the score. Lastly, the instrumentation in various parts felt wrong as well. Throughout the album, a reverberating electronic bell sound is used, which does not fit with the martial arts, Canadian forest, and Asian-set film. Beck attempted to give some of the film an eastern feel for the martial artists involved with electronically-backed percussion and a duduk in "Ferry Crossing" and "Elektra's Second Life". The duduk is Armenian; a shakuhachi or Japanese fue might have been more appropriate. Basically, I am disappointed by what could have been a powerful action score for one of the strongest female characters on screen in the past few years.