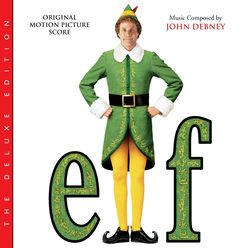 Elf accomplished the impossible when it was released in 2003: it became an instant, modern-day Christmas classic. Will Ferrell starred as Buddy—one of his iconic roles—a human boy raised to believe he is one of Santa's elves. When Buddy discovers his true identity, he ventures out to find his real father, played by James Caan, and in the process spreads Christmas cheer to a cynical world.

Directed by Jon Favreau, the film was a massive box-office hit that led to a Broadway musical and stop-motion animated special. It was the first collaboration between Favreau and composer John Debney, which would later bring Zathura, Iron Man 2 and The Jungle Book.

For Elf, Favreau asked Debney for a score that would be "timeless," and Debney's charming orchestral score channels Buddy's innocent outlook as well as one of Favreau's inspirations, the Rankin/Bass Christmas television specials. From Christmas whimsy, to light-hearted comedy and rousing symphonic action, Debney's Elf music is a tuneful jewel.

Elf was released by Varčse Sarabande at the time of the film. This Deluxe Edition features an expanded score program, as well as the alternate and edited tracks from the 2003 CD. Liner notes by Tim Greiving feature new interview material with Favreau, Debney and one of the film's stars, Mary Steenburgen.