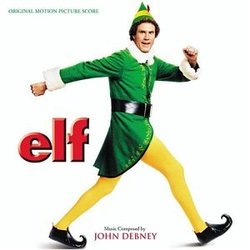 Family comedy composer guru John Debney is at it again with his final pre-Passion score album Elf.  The film stars SNL comedian Will Ferrell as Buddy, a human raised as an elf by Santa's little helpers in the North Pole.  When he's all grown up, he is told the truth about his human origin and heads off to New York to search for his real father.  The score, like other Debney comedy scores, accompanies the film perfectly with nice little themes and cartoony action music.  Since the film is about Santa, his elves, and Christmas, the score feels very "Decemberish" always filling the listener with the joys and feelings of the Holidays.

The "Main Title" track establishes the main theme which his performed by a whistling chorus.  It's a very charming and fun melody that you will be whistling long after your first listen.  Through out the album the theme pops up many times; in "Buddy's Theme" it is orchestrated like a soft lullaby, but the theme is most rousing in the short-but-sweet track "Buddy and Santa's Flight."  The cue "Frozen Battlefield" is another highlight utilizing military percussion and a heroic brass motif that accompanies the snowball battle on the screen.  More action returns towards the end of "Central Park Rangers" and in and out of "Showdown in the Park."

This is your standard family comedy score, folks.  There really isn't anything spectacular here.  If memory serves correct, the music on the album includes most of the film's major highlights.  I don't think there is any music in the film not included here that would merit a longer release.  If you are a huge fan of quirky light scores, cutesy themes and cartoon music, I would recommend it.  It is a fun listen, but the album quite short.

Recently John Debney has been receiving some much deserved attention (and cash) for his soundtrack from Mel Gibson's Jesus flick The Passion of the Christ.  Hopefully the success of that score will finally pull the ear plugs out of studio executives and place Mr. Debney next to Williams, Goldsmith, Horner, Zimmer, etc. where he belongs.  His great scores for Cutthroat Island, Sudden Death, and End of Days have been mistakenly over-looked far too long by studio producers.  This man is better than Paulie, people!!  John Debney is truly one of Hollywood's best kept secrets - let's see what else he can do!