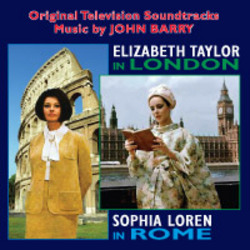 Sometime between his work on Dr. No and From Russia with Love, John Barry recorded a deliciously melodic soundtrack for a television special called Elizabeth Taylor in London. It was a project that providing a unique opportunity for music, since there was no dramatic storyline to follow. Music would be placed at the foreground, providing a romantic soundscape that captured not only the flavor of the English capitol city but the personality of its star tour guide. While the 58-minute special focused on its glamorous host, Elizabeth Taylor, as she took viewers on a tour of her home city, the music would be just as important, providing thematic unity to the travelogue and adding an emotional splendor to her visual excursion throughout the city.

As an Englishman himself, John Barry was the immediate and only choice of the film's co-producers, who had known him for his work with his recording band, the John Barry Seven, and particularly his work on arranging the James Bond Theme and composing the jazz music for Bryan Forbes' The L-Shaped Room. Barry was present during filming and began formulating his themes and accompaniment in the process; in fact he had completed the soundtrack before shooting had even been finished.

Two of Barry's best themes from his early years were written for the show, the lively and luxurious "Elizabeth," which served as the show's main title and introduced the star with the musical opulence and beauty she represented, and the stately waltz, "The London Theme."

The success of Elizabeth Taylor in London prompted D'Antoni and Baer to develop a follow-up special to be broadcast the following year. 1964's Sophia Loren in Rome would follow the same format, with the Italian star serving as tour guide to her own country's capitol.

As with Elizabeth Taylor in London, Barry composed a main theme for the star ("Sophia"), giving it an authentic Italian flavoring through the dominant use of mandolin and accordion; but the score's primary theme remains "Secrets of Rome," which holds in its captivating melody a sense of wonder and grandeur for the Italian city and its rich history.

Both of these soundtracks are now available for the first time ever together on one CD. A resounding "must" for all John Barry collectors AND fans of both Elizabeth and Sophia!