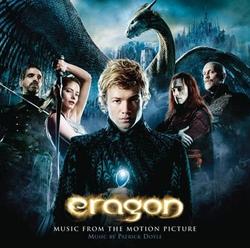 While I enjoyed Patrick Doyle\'s score to Harry Potter and the Goblet of Fire very much, I felt that he seemed a bit reluctant to write a new main theme in respect for John Williams\' themes for the first film; however, Doyle also seemed reluctant to overuse Williams\' themes in his score. That left the film without a bold main theme, but numerous smaller ones. Doyle\'s newest fantasy score does not suffer from the same problem, as he was able to start from scratch and develop his own main theme, which he did with much enthusiasm. Doyle\'s Eragon theme is bold and heroic and, judging from reviews, may be the best part of the film.

The album opens with a slow buildup to the first statement of the theme, which is performed heroically by the orchestra and augmented by the trumpets. A second statement toward the end of the track adds in a stronger low brass and horn presence. The horns continue in "Roran Leaves" with a solo that leads into a string and woodwind statement of the theme. Doyle\'s Eragon theme proves to be able to be varied well for different styles, and it is therefore the only major theme used in the score, and quite prominently. This is a strong point for the score, as opposed to Goblet of Fire, but it approaches the point of overuse with only different variations on it to add to the diversity of the score.

The album takes a darker turn with "Ra\'zac" with an underlying low brass line and one of the most varied versions of the theme. "Burning Farm" and "Fortune Teller" continue this dark trend with some very strong action scoring. The former opens with an oboe theme statement and then percussion and a horn line come in to add a foreboding tone. The shifting brass solos mixed with the percussion makes this cue one of my favorites. "Fortune Teller" builds nicely into a frenetic cue with racing strings and brass and a bit of choir toward the end. This darker section of the album is ended with the heroic "If You Were Flying", which brings to bear the second full statement of the Eragon theme in all its glory. It is varied a bit with added trumpets from the opening cue. The score slows a bit from this point, but picks up again with the 10 minute "Battle for Varden", which follows the dominantly solo horn cue, "Passing the Flame". I had high expectations for this action cue after hearing other parts of the album and was a bit disappointed. After some slower variations on the theme, it moves into a percussive orchestral piece with snippets of the theme on brass and some brief choral cues. As this year\'s Christmas fantasy epic, it does not hold up to Harry Gregson-Williams\' battle music from The Chronicles of Narnia: The Lion, The Witch and The Wardrobe, although I think there may have been some influences from it.

The album takes a few cues to close. The aftermath of the battle, "Together", features Lisa Gerrard-like vocals and then turns heroic again for "Saphira Returns" and "Legend of Eragon" with full blown statements of the theme. Doyle wrote his epic fantasy theme here and I think made up for not using one in Harry Potter as it seems to be always playing either heroically in the foreground or behind other music in the strings or oboe. In fact, by the end of the album, when the theme returns in full, I\'m almost tired of it. That is not to say that the theme isn\'t good - I am impressed with both the melody of the theme and Doyle\'s ability to meld it into a number of styles and musical settings. Unfortunately, the studio decided to tack on two forgettable pop songs to the soundtrack. But fans of Doyle\'s score to Harry Potter and the Goblet of Fire should check out this score as it is a good addition to the epic fantasy score genre.