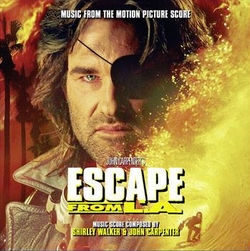 For the sequel score to the cult hit Escape from New York, composers Walker and Carpenter create a vastly more heroic symphonic score while retaining the inventive electronic palette that had come to represent Snake in the previous film. This newly expanded release clocks in at nearly 79 minutes, featuring music recorded for, but unused in, the final film. New liner notes by Daniel Schweiger and artwork by Dan Goldwasser round out this slick package.