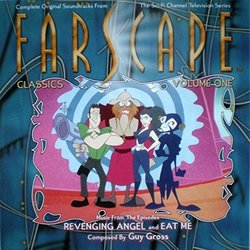 La-La Land Records' release of Guy Gross' music from two episodes of "Farscape" in the first of what I imagine will be a series of releases. The main title is energetic with a really cool mix of choir and electronics with the orchestra. This theme repeats in the opening and closing credits of both episodes on the CD. The first ten tracks are from the episode "Revenging Angel", and are somewhat quirky in a comic sort of way with muted brass instrumentation, reflecting the content of that episode. The remaining twelve cues are from the darker, horror-genre episode "Eat Me", and reflect a completely different side of Gross' musical writing. Generally, this CD is a mix of underscore from the television show. When compared to Gross' fully orchestral score for Farscape: The Peacekeeper Wars, it pales in comparison. While this CD will be embraced by fans of the show, the film score is a much better listen to get a sense of Gross' talent and his work for the "Farscape" franchise.