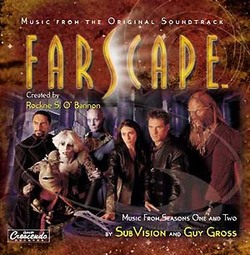 by David A. Koran March 8, 2001
2.5 / 5 Stars
Farscape is a show that has the potential of being more than what it seems from the outset. For a show that has made it’s entrance strictly on a cable channel dedicated towards the science fiction genre, it seems to have garnered a kind of fan base that a predecessor like Babylon 5 could have only wished for. I was lured to the show through the mention of one of my idol’s association with the show, albeit in company name only, Jim Henson. I’m sure a lot of other viewers have been drawn in by interesting storylines and compelling characters, something which is obviously lacking even from regular network television shows. It’s science fiction, and for a portion of society, it’s hands off, but with the geek and nerd culture occasionally driving show production (see The X-Files), we occasionally receive a surprise such as Farscape on our programming schedule.

The show takes a bit to get used to, even with a short summary of the initial reasoning behind the show during the opening credits. Unlike shows such as the newer Star Trek series, Farscape plays more like a really long mini-series, with the major goal of John Crichton trying to return to Earth through a wormhole not becoming forgotten during the intricate side stories that occur from week to week. This is not to say that the other characters don’t have their own interesting stories, which, in this case, makes the show an interesting watch since it’s not centered only on the quest of one character. The depth of the storylines and, even, believe it or not, the production values (sets, EFX, etc.) make it just as worth watching as those afore mentioned Babylon 5 and Star Trek staples of the 1990s. As of this date, I’ve caught about a dozen or so episodes, and I think, that if I was given the chance to re-watch the series from the absolute beginning (even more likely given the recent release to the first two episodes on DVD) I would have something worthwhile to waste time in front of the boob-tube for.

Of course, since this is supposed to be a review of the accompanying CD for the series, let’s get to reviewing the music, shall we. Most striking, to begin with, is the rather primal sounding wordless main title theme from the show (mirrored in the reprise at the end), written by the first half of the composing team for the series (notably for season one), SubVision. To me, with the electronica focus inherent in their cues (tracks 1 through 11 on the album), I’m reminded a bit of Chris Franke’s work on Babylon 5. Granted the work here is a bit less atmospheric and less noisy than those represented on the released episodic CDs for the show. However, with the depth of the music going beyond just synthesizers, some of the orchestral sampling and arrangements has me wondering if this would be something that arose from the sessions of Vangelis’ work on Blade Runner. The use of the electric guitar on a few cues also evokes the name of another composer and filmmaker, John Carpenter, who, strangely enough, knew how to use the instrument in a score without it sounding too corny or out of place. A current contemporary for this style of composing for TV can also been heard in Kris Karter’s work on the Batman Beyond animated series. The music never really slows down, or at least the tempo really never does, which helps keep the pace of the action in the series on the edge of being completely frenetic. If you like SubVision (a family crew of father Chris Neal and brothers Braedy Neal and Toby Neal), I could also recommend another eccentric and experimental composer/musician, Ben Neill, who’s work can be heard in a number of Volkswagen commercials and on several CDs of his own.

The second half of the CD is from the second season and is comprised of compositions from Guy Gross. As mentioned in the liner notes, Guy Gross is a classically trained musician, and the structure and composition of the music reflects it as compared the techno and dance influenced works of his contemporaries, SubVision. Granted this tact on the music helps provide a better and more stable emotional base for the series, but I find it just a bit less interesting than the first half of the album. Whereas the first eleven tracks avoided the atmospheric melodies, Mr. Gross’ compositions wade waist to armpit deep in them. Also, if I was going to get too picky, I’d hope that in the successive seasons, Mr. Gross upgrades his orchestra synth samples to something that doesn’t sound as contrived and blatantly electronic as some of the cues come across as. Purely electronic sounding might work for someone like Wendy Carlos, but unfortunately it arrives a little flat here. Just because it’s set in space and in the future, doesn’t mean it couldn’t follow a more classical tact, even if the producers of the series steered the music in the opposite direction. Given the relatively even split of compositions among the composers, I also have to average out my recommendation of the album. For fans of the series, it’s a nice addition as a souvenir of those Friday nights tuned into the Sci-Fi Channel, but for the casual film or TV score buyer, you can pass it up at first until you get absorbed into the series.