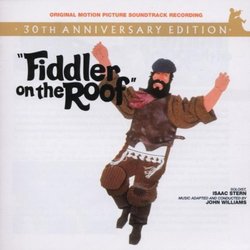 Back in 1971, director Norman Jewison brought the Jerry Brock / Sheldon Harnick Broadway musical "Fiddler On The Roof" to the big screen.  The (now) classic story focuses on poor milkman Tevye (Topol) and his family - and how they face the challenges confronting them in turn-of-the-century czarist Russia.  Through the course of the film, Tevye's faith in his religion will be pushed to the limit - and possibly tear his family apart.  Composer John Williams had recently done the television movie Jane Eyre, and hadn't even met (let alone heard of) Steven Spielberg when he was brought on board to adapt the music for the film version of the musical.  His resulting efforts landed him his first Academy Award - and it certainly wouldn't be his last.  Now, for the 30th Anniversary release of the film, the soundtrack to Fiddler on the Roof has been re-mastered and enhanced with newly discovered score cues that hadn't been released before.

The rather lengthy pre-title sequence covers Tevye's faith in "Prologue And 'Tradition' & Main Title".  Dialogue and music (with singing, of course) take us through a quick explanation of the Jewish faith as it existed in Russia at the time.  But it's the Main Title that just stops the show.  This lengthy violin solo (performed amazingly by the recently-departed Isaac Stern) covers many of the secondary themes heard in the film - and when the full orchestra joins in, it's just a wonderful experience.  All of the classic songs are here: "Matchmaker", "If I Were A Rich Man", "To Life", and "Sunrise, Sunset", as well as some of the lesser known ones.  The sound quality is reasonable, although it shows its age all too frequently.

The newly discovered "Wedding Procession" cue is a rather upbeat klezmer number, and the classic "Wedding Celebration and 'The Bottle Dance'" cue is full of happiness and joy.  All of which comes crashing down when the local authorities have a pogrom and destroy the wedding.  Tevye looks to heavens and asks God "Why?" as John Williams's newly discovered "First Act Finale" swells underneath. It's quite a departure from the rest of the underscore on the album - it's dark, full of sadness, and hints rather strongly at the solid emotional work Williams would do within the next ten years.  Also included is the previously unreleased "Entr'acte", which recaps most of the songs heard in the film.  However, the second act of the film is a generally downbeat one, with many things (including Tevye's family) falling apart.  "The Rejection Scene" is where Tevye is faced with a horrible decision - choosing his daughter or his faith.  In the end, (as much as it breaks his heart - and ours) he goes with his faith.  Williams used the main theme from "Tradition" in a powerful statement here, and I'm glad they included this cue on the album (even though it's full of dialogue).  I've always had a strong emotional attachment to "Anatevka", and coming on the heels of that previously unreleased cue, it's even more emotional.  There is some distortion present in "Anatevka" that is annoying, but it was on the original release as well - so it's not really anything new (unfortunately).

Added on as a bonus track is a newly discovered demo song, "Any Day Now" that did not show up in the final film.  It's a nice upbeat hopeful song, and ends the album on a rather pleasant note (considering the Diaspora with which the film ends).  If you don't have Fiddler on the Roof yet, you should definitely get it - if anything to hear Williams' wonderful adaptation work. If you already have the album, you don't necessarily need to rush out to get this album - there isn't that much new stuff.  But it's definitely worth checking out if you get the opportunity.