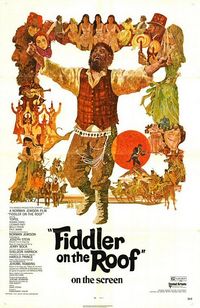 Fiddler on the Roof

By the early 1970s, the movie musical was starting to peter out. Studios weren't seeing as much of a return on their investments, and some films, like Sweet Charity, Paint Your Wagon, Doctor Dolittle, Camelot and Goodbye, Mr. Chips were not well received at the box office.  So when United Artists decided to make a big-screen version of the popular 1964 Broadway musical Fiddler on the Roof, it was certainly considered a gamble.  Loosely based on the stories of Yiddish author Shalom Alechem, the film tells the story of milkman Tevye (Topol) and his fellow community of Jews in the small Russian village of Anatevka at the turn of the 20th Century.  Life is hard - Tevye and his family are poor, the Jewish community in Tsarist Russia has to deal with the growing Orthodox Christian community, and Tevye is hoping to have his eldest daughters married off to the rich butcher - but she's in love with the poor tailor instead.  These issues, as well as the impending Soviet revolution, more forbidden love,  and the growing oppression from the less-than-tolerant neighbors, keeps Tevye and his community on edge, and has the potential to tear his family apart.

Directed by Norman Jewison (In the Heat of the Night), Fiddler on the Roof is one of those classic film musicals that succeeded where others failed. The characters are instantly likable, and while it's unlikely that most of the audience could relate to the Tsarist Russian Jewish shtetl, the generalized themes of traditions and conflict between generations resonates in any culture.  Toss in a little humor, some romance, some drama, and memorable musical numbers by Sheldon Harnick and Jerry Bock, and you have all the right ingredients for an excellent film. On top of that, the scope of the film - shot in mainly on location in Yugoslavia and featuring gorgeous Oscar-winning cinematography by Oswald Morris and musical arrangements by John Williams - makes it much more than just a filmed-version of a stage musical.  Fiddler on the Roof is a period film that has timeless themes, characters that people can relate to, and great pacing (you don't feel the three hour length).

For the release on Blu-ray, Fiddler on the Roof was given a new HD transfer.  Unfortunately, it doesn't seem like any sort of film restoration was done - the print is a little grimy at times, and there's almost constant subtle gate-weave in the image.  That being said, the anamorphic image is crisp, and only a hint of DNR and edge-enhancement but it doesn't detract at all.  Colors are never overly saturated, and the brown palette of the film comes through nicely. Still, if the source material exists, this is a film that would definitely benefit from a proper restoration treatment.  It should be pointed out that this is still not the true theatrical version of the film - the United Artists logo at the beginning of the film is not the version seen theatrically which used (from what experts can surmise) was a piece of music that Williams wrote. Also, there is no Intermission title card, leaving us very little room to catch our breath after the emotional Act I finale before the joyous Entr'acte music comes in.  Perhaps for the 50th Anniversary in ten years?

Audio is presented in a shiny new DTS-HD MA 7.1 English track.  It's not going to blow the roof off, however - most of the movie is front-heavy, and the dynamic range is rather limited considering the 1971 source material.  However, the occasional use of sound effects in the rears helps a little bit with the ambience of the film, and John Williams' musical arrangements benefit greatly from the lossless presentation.  Additional audio tracks include Spanish mono, French DTS 5.1, Portugese Mono, Italian DTS 5.1, German DTS 5.1, and Castellano DTS 5.1.

While billed as a "40th Anniversary" edition, this Blu-ray release of Fiddler on the Roof doesn't have any new extras, instead recycling the extras from the previous 1998, 2001 and 2007 DVDs.  From the 1998 release, a feature-length commentary track featuring director Norman Jewison and lead actor Topol is definitely a highlight.  While they were recorded separately, and there are occasional pauses as they watch the film, each provides unique insight into the production of the film, and the challenges they faced while filming in communist Yugoslavia. From the 2001 release, the Canadian documentary "Norman Jewison, Filmmaker" (SD, 49.5-minutes) is a 1971 doc that really shows Jewison at work.  It's not a puff piece at all, and it's fascinating to see how he handled himself in the face of many obstacles.  This was followed up in 2001 with "Norman Jewison Looks Back" (SD 16x9, 10-minutes), five small segments with Jewison reflecting on some additional aspects: "On Directing", "Strongest Memory", "Biggest Challenge", On Casting", and "A Classic?".

A "Storyboard to Film Comparison" (SD, 21-minutes) shows five scenes with accompanying storyboards, but missing from this release are the 2001 featurettes of Jewison reading and discussing the "Shalom Alechem Stories" and "Historical Background" which provided the source for the film's story.  From the 2007 special edition, we have some music-related featurettes.  "John Williams: Creating a Musical Tradition" (SD, 11.5-minutes) is a great archival piece where Williams talks about the challenges he faced in adapting the popular stage musical for the big screen.  "Songs of Fiddler on the Roof" (SD, 15-minutes) is a good look at the musical origins of the film, with the stage creators Joseph Stein, Jerry Bock and Sheldon Harnick.  This is followed by "Deleted Song - Any Day Now" (SD, 3-minutes), a deleted love song which is presented by Jerry Bock in fully orchestrated demo form, set to still photos from the film.

Continuing the 2007 featurettes is "Tevye's Daughters" (SD, 16.5-minutes), a nice look back at the three actresses who played the older daughters: Rosalind Harris, Michele Marsh, and Neva Small.  They recount their experiences getting cast and working on the film - in fact, it would have been nice to have all three do a new commentary track for the 40th Anniversary, since it seems like they have a lot more to tell than what is revealed in 16 minutes.  "Set in Reality Production Design" (SD, 10-minutes) is a short but very interesting look at Robert Boyle's impressive work creating the period set-pieces on location in Yugoslavia.  A presentation of "Tevye's Dream in Color" (SD 16x9, 6-minutes) starts with Jewison explaining the reason to show the scene desaturated in the final film, followed by the original full color version. You can also choose to watch segments of the scene in a "Side by Side Comparison" (SD 16x9, 1.5-minutes).  Finally, a selection of trailers and television spots (all SD) round out the extras.

It's a shame that no new extras were created for the 2011 40th Anniversary release of Fiddler on the Roof.  While the transfer is relatively solid, it could have benefited from a proper restoration, but the improved video and audio presentation is really the only reason to upgrade from your DVD release of the film.  It's possible that a restored version with new extras will be forthcoming for the 50th Anniversary, but we'll just have to wait and see if this classic will finally get the treatment it deserves.