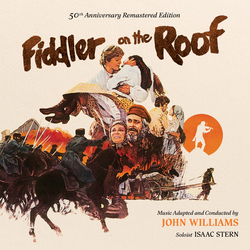 La-La Land Records, MGM and Capitol Records proudly present a 3-CD limited edition 50th Anniversary remastered and expanded reissue of acclaimed composer John Williams' Academy Award-Winning score to the classic 1971 motion picture adaptation of the Tony Award-Winning musical Fiddler on the Roof starring Topol, Norma Crane and Leonard Frey, and produced and directed by Norman Jewison. The timeless songs ("Matchmaker," "If I Were a Rich Man," "Sunrise, Sunset," etc.) were written by Jerry Bock and Sheldon Harnick, and the film soundtrack features virtuoso violin soloist Isaac Stern. Orchestrations for the film are by Alexander Courage and Williams himself.

The enduring big screen film version of Fiddler on the Roof, produced by The Mirisch Company in association with United Artists, premiered 50 years ago and went on to become one of the year's biggest hits and earn Academy Awards for Cinematography, Sound and Best Adapted Score. The winner in the latter category was none other than John Williams, soon after to become the world's most famous film composer.

In celebration of the film's 50th anniversary, this deluxe presentation, approved by Mr. Williams, offers a fully restored, remixed and remastered original soundtrack recording program on Disc One, a second disc of alternate versions, and a third disc featuring early "playback" versions of the songs as well as selections of Williams' underscore and other musical material released for the first time. (Some tracks on Disc 3 are derived from the finished film mix and may contain sound effects). Produced, restored, mixed and mastered in high resolution by Mike Matessino (from the 1-inch 8-track soundtrack masters for the main program material), this limited CD re-issue of 5000 units includes an exclusive, deluxe essay booklet by Matessino that provides a detailed account of the creation of the score, which was recorded at Anvil Studios in England, and never-before-seen photos from the recording sessions. A second booklet provides a colorful program guide. The joyous art design is by Jim Titus.