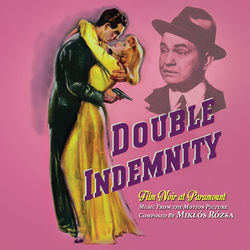 This set featuring seven different composers writing for film noir classics. The headliner is Miklós Rózsa's Oscar-winning score to Double Indemnity, in near complete form. Rózsa composed three principal motifs for the film. A restless "conspiracy" theme dominates his score, but it is the powerful murder theme that opens the film and the composer returns to this theme repeatedly with an almost tragic quality. The third principal theme is a love theme.

In The Desperate Hours, Gail Kubik took an unusual and daring approach, writing and recording an unpredictable score.

For The Scarlet Hour, Leith Stevens supplied suitably dramatic and agitated original cues for key scenes, but the main musical focus of the film is the original song "Never Let Me Go," written by the team of Jay Livingston and Ray Evans.

Although the main titles of Union Station don't list a composer, Heinz Roemheld scored the picture, yet little of his music ended up in the final film.

Finally, the nearly 30 minutes of Victor Young's I Walk Alone features a vivid and varied score including bluesy music and exciting chase music.

Most of the music in this album was sourced from 35mm magnetic film stored in the Paramount vaults. Desperate Hours is three-track stereo. The Scarlet Hour is in "quasi stereo" because there were "directional angles" for certain cues, while all the other film tracks are mono.