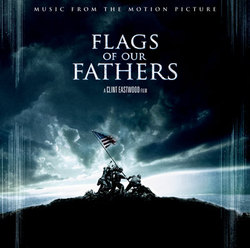 Flags of Our Fathers

Review: Flags of Our Father

Clint Eastwood, being the highly acclaimed filmmaker Clint Eastwood, could probably hire any composer he thought of to score his latest war epic, including someone like John Williams. Instead, he composed the score himself (undoubtedly with some assistance by Lennie Niehaus), as usual. This worked in the past for films like Million Dollar Baby, and Mystic River, but this World War II drama needed something more. For a film in the class of Saving Private Ryan and Band of Brothers, it needed a heroic and patriotic score. Instead, Eastwood provides a low key, nearly minimalist set of cues that have very little linking them together. "Armada Arrives" attempts to be heavy and dramatic, but falls flat as soon as the drums stop. The piano dominates the score for the cues not set during the battles and basically repeats the same few short Americana theme. "Inland Battle" is a set of quietly changing chords, and I don\'t mean in the same way as The Thin Red Line.

Let\'s take the key moment from the film, the raising of the flag that has inspired so much. "Flag Raising" is a set of drawn out notes and an occasional snare beat in the background. And that\'s it; it\'s dull and uninteresting. The only decent cue on the disc is the first one, "The Photograph", which opens with a quiet French horn theme. This never returns. Mixed into the soundtrack between the forgettable score tracks are some Sousa marches, 1940\'s songs, and classical source pieces that effectively set the film in the time period, but don\'t really add much to the album. One decent track is a jaunty number ("Knock Knock") by Eastwood\'s son Kyle (who co-scored the companion film, Letters from Iwo Jima); it\'s even treated to sound like an old recording. Clint Eastwood is an amazing director, but like Robert Rodriguez, he needs to stop trying to do everything for his films. It is a shame that a film depicting such a heroic event in World War II has such an uninspiring score. Sadly, the price of this soundtrack is not worth the 55 seconds of enjoyable music.