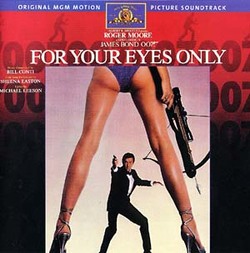 For Your Eyes Only

Review: For Your Eyes Only

by David A. Koran May 24, 2000
3.5 / 5 Stars
What can be said for this score other than, "if it ain't Barry, don't fix it." I mentioned in an earlier review of John Barry's work on High Road To China, that during the five year hiatus from writing Bond music, another composer had to be found to score 1981's For Your Eyes Only. Having recently come off of scoring for several successful films, including Private Benjamin and Rocky and its sequel, Rocky II, the British producers looked towards America and gave Bill Conti the nod. Unbeknownst to the EON Productions crew, is that the composer they gave the job to, has a definite hit and miss record with applying appropriate scores to films. The only two less correct scores for a Bond film go to Marvin Hamlisch and The Spy Who Loved Me and Eric Serra and his work on Goldeneye. Don't get me wrong, Conti has his moments, which come sporadically throughout the film and score, but much of what is "heard" through the film is the post-disco 80's synth-pop cues that seriously date this entry in the Bond series.

Conti does a great job of integrating the co-written main title song, "For Your Eyes Only"," into the score itself, and his high point comes on Track 12 of this CD where the symphonic cue transitions quite well into an end title treatment of the song. But most of the score is way too overblown to be respected by true Bond fanatics. The second cue, "A Drive In The Country," which launches one of the better action scenes in the film, is done to a "Mecco-like" disco band, throwing what could have been both a dramatic and humorous moment into mediocrity. Conti does, as I mentioned earlier, have some real moments, even if they place the film in a certain time and place, with "Take Me Home" and the opening of Track 4, "Melina's Revenge" until it turned into a rock anthem. I'm sure most of it was well intentioned, but it missed it's mark in my mind. Even Michael Kamen, who was, I bet, under extreme pressure in his take of License To Kill to pop it up a notch. This was to appeal more to rock and pop listening audience of the late 1980's, and Kamen probably thought about going the Conti-like route, but in the end stayed more traditional to the Barry-Bond sound, with a Latin influence. These musical "flings" that the producers take with the film are usually explained away when the composer usually isn't called back to do another (are we lucky with David Arnold?)

It's hard to totally berate the album, because there are moments, and even extra cues at the end of the CD, but the overall inconsistency leaves me waffling on a thumbs up or a thumbs down review. I'd have to say if you were a fan of "Bond 77" and "Ladies First" from The Spy Who Loved Me and Goldeneye respectively, then this album would be up your alley. If your favorites were On Her Majesty's Secret Service, The Living Daylights, and Goldfinger, then put this album on your pass list. It seems in their need to capitalize on MGM's re-issues of the Bond DVD's and their location move, from picturesque Salem, Massachusetts, to metropolitan New York City, they put out an album that, although exciting to Bond completeists, missed the boat musically and content-wise. Even the liner notes could have used some sprucing up. Lets hope this is the occasional bump in the road for Ryko Palm, and that we'll be seeing more and better releases in the near future, Bond related or otherwise.