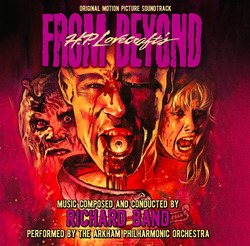 Performed by
The Arkham Philharmonic Orchestra

Dragon's Domain Records presents a new release of From Beyond, to be distributed through buysoundtrax.com. From Beyond features music composed by Richard Band for the 1986 science fiction/adventure film directed by Stuart Gordon, adapted by Brian Yuzna from the short story by H.P. Lovecraft, starring Jeffrey Combs, Barbara Crampton, Ted Sorrel and Ken Foree. The music has been newly mixed and mastered from the original 24 hour track elements.

The score for From Beyond was created with a mixture of early synthesizers and a small orchestra of around 40 string players and some percussion. Band made a point of combining the electronics with the orchestra in an integrated manner, rather than using orchestra and the electronics as separate entities.

For this new release of Richard Band's From Beyond, Dragon's Domain Records has gone back to the original 24-track master and had engineer Matt La Point completely remix the score from the ground up, under the supervision of composer Richard Band, digitally remastered by James Nelson at Digital Outland, including liner notes written by author Randall Larson, with the participation of the composer. In addition to the eighteen tracks that make up the score's track order, this new release of From Beyond includes three bonus tracks. The goal on this one was to bring out a lot of detailing that had been obscured in the original mix and everything that came afterwards and also take advantage of advances in audio technology that have come out since the original Mix which greatly improved the score on a sonic level.