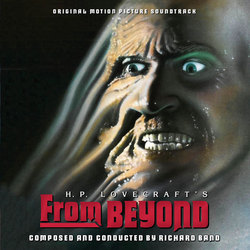 The 1986 Empire Pictures film From Beyond features music that takes place in two worlds. One is the orchestral, organic sound of reality, where masochistic desire and monsters are made flesh by the film's catalyst of evil—the resonator. The other is one of chilling, expressionistic electronics, coming through in bizarre, undulating waves to reflect a floating dimension of horrors. From Beyond's score keeps the listener on a razor's edge, creating a sense of nerve-twisting unease that transcends the simple act of listening. A complex, yet coherent meld of 40-45 string players with harp, piano, percussion and a multitude of electronic ideas woven throughout, Band showcases a horror score that rises above its peers.

For this reissue of one of Band's most prized works, Intrada has remixed the entire score from the 24-track session elements. In addition to startling clarity and never-before-heard detail, several previously unreleased tracks bring additional depth to the score, particularly the important "Kathy Dresses Up," with its cascading harps, piano arpeggios and undulating figures combining to create a creepy, quasi-sensual feel for Kathy's seductive behavior courtesy the resonator.