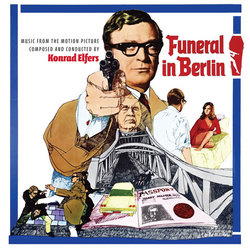 For the 1966 Paramount film Funeral in Berlin, famed Bond producer Harry Saltzman hired veteran German pianist and composer Konrad Elfers to provide the follow on score to John Barry's effort for the first film, The Ipcress File. Elfers wrote a score that sits comfortably between the works by Barry and Richard Rodney Bennett (who would compose music for Palmer's third film, Billion Dollar Brain), combining the requisite jazz/big band sound of spy movies with a mix of classical and modernistic orchestral music that evoked the historical and modern aspects of the film's setting in Berlin.

The original RCA Victor LP boasted an unusually comprehensive presentation of Elfers' score at around 39 minutes of music. This expanded Intrada version features all the album cues—including two that were dropped—sourced from 1/2" three-track masters.