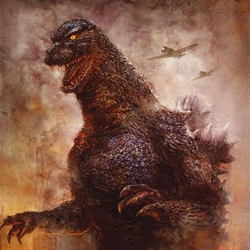 Death Waltz Recording Company are proud to be unearthing the legendary monster of our time and bringing him to vinyl in the shape of Akira Ifukube's score to Godzilla. Starkly different to the usual view of The Big G as the ultimate monster wrestler, Ifukube's music is intense, dark, and reflects Ishiro Honda's film as a pure horror film. While the score opens with the jaunty riff that would eventually become Godzilla's Theme, the majority of the music alternates between pounding brass and mournful strings as we witness the death and destruction that comes in Godzilla's wake.

Ifukube uses low string notes as a sinister motif to herald the arrival of the creature, and then turns up the brass to eleven, creating an atmosphere of pure apocalypse. More horrifying still are the piercing strings that score the oxygen destroyer, the device that would destroy Godzilla. Big laments are used as the characters question the use of the machine as a weapon of mass destruction, and it's this remarkable human quality that infuses the score with its unique feel. Help us celebrate the sixtieth birthday of the greatest monster to walk the earth, and the powerhouse musical experience that is Akira Ifukube's Godzilla.