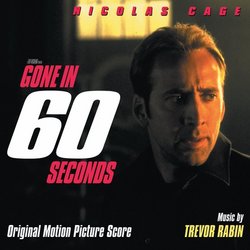 Gone in 60 Seconds was not a very good film. Sure it was entertaining, and contained some great stunt sequences, but the storyline was rather bland, and the characters didn't have much depth. Focusing on an ex-car thief who has to steal 50 cars in 24 hours or else the bad guy is going to kill his brother - but meanwhile the cop almost got him years ago is out to get him again. Ok - stop laughing. But it was a Jerry Bruckheimer film, which meant it would have some great shots, some great moments, and a high-octane action score. In this case, that score was provided by Trevor Rabin.

Rabin, to no surprise, takes great advantage of electric guitars in his score. But it's more of a hard-rock / techno score than anything else, with a lot of electronic rhythms and textures that are complemented by a full orchestra. "Porche Boost" (yes, it's misspelled on the album) contains some great rock orchestra moments that harken back to some of Rabin's previous scores. The ethereal female voice in "The Last Car" (1 minute into the track) reminded me a bit of Lisa Gerrard's work on Gladiator and Mission Impossible 2 which confirms for me that 2000 was definitely the year of the "oohing" female in film scores. A calmer cue, "Keys To Eleanor" is a more dramatic, almost heroic cue that is followed by the dark atmospheres of "50 Cars".

Most of the cues are short. The average cue runs about 1:30, with the two longest cues being "Roundabend" and "The Last Car". "Roundabend" is a full action sequence, complete with the enjoyable dramatic stings and moments. One of the problems with the score is that it's hard to differentiate many of the cues from each other. There is thematic material, but it's not the focus of the score (at least, the part that shows up on the album). As such, it sounds like the album is a solid 29-minute suite.

Yes, 29 minutes. The ugly cost of reuse fees made it prohibitive to give this score a full release, but to be honest, I think the 29 minutes we have here are just fine. It's a solid listen, but it's nothing spectacular. If you want a great Rabin score, check out Con Air or Armageddon.