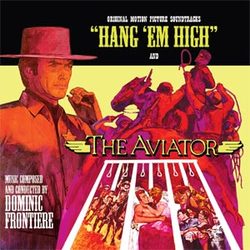 Doubtless much to the chagrin of his fans, Dominic Frontiere\'s oeuvre as a film composer is not widely known today relative to other composers of the Silver Age. A quick scan through a discography of his work indicates why: not a lot of his prolific career for film and television has been released on CD, making La-La-Land\'s new pairing of Frontiere\'s scores for Hang \'em High and The Aviator a welcome release.

Not that any devoted listener who had really searched would have had difficulty finding some form of release for Frontiere\'s memorable score for the 1968 film Hang \'em High. A less than legitimate CD made the rounds with ten tracks of the score alongside Ennio Morricone\'s Guns for San Sebastian. (The latter thankfully released in expanded form by Film Score Monthly in 2006.) There was also an EMI release with much better sound, but only seven tracks of Frontiere\'s score, together with Elmer Bernstein\'s The Scalphunters and Bronislau Kaper\'s The Way West. The emphasis on La-La-Land\'s website that this new CD is \'the official, studio-endorsed CD release\' makes one wonder whether the EMI release was also illegitimate. La-La-Land\'s new release offers the best of both worlds - all ten tracks, in the best sound possible.

The score, like the Clint Eastwood film it supported, has (for me) irresistible charm. Frontiere may not have produced a sound for the old west quite as avant-garde and toe-tapping as Ennio Morricone was doing about the same time, but neither was Ted Post\'s film directed with any of the self-conscious style of one of Sergio Leone\'s horse operas. (The direction is straightforward and effective, and the screenplay\'s heart is less set on celebrating the genre than exploring the theme of law enforcement in a lawless time.) Neither did Frontiere pick too conservative a route, steering clear of Coplandesque symphonic Americana, making use of a smaller ensemble with selected soloists to relate the dark tale of the coolest revenger that ever survived a lynching. It\'s never too cool for what the story needs it to be, nor does the music ever play it too dark. (How could you, with Eastwood\'s smooth performance at the centre of things?)

The main theme is a sprightly piece, opening for harmonica and guitar before giving way to a plucky trumpet melody, with catchy accompaniment for harmonica, guitar, brass and percussion. There\'s a few ideas introduced in the melody and counterpoint of the main title that return at carefully structured intervals throughout the story. In particular, Frontiere nicely weaves a motif for Eastwood\'s fortunes throughout the score - as he is lynched in "Tumbleweed Wagon", the brass belt out the five note motif with judgemental percussion. (The punchy percussion cutely evokes a judge\'s gavel.) When he survives the lynching to emerge as the marshal assigned to hunt the men who wronged him, that brass \'judgement\' becomes a part of the main theme - played for harmonica - in "Hang \'em High". Hearing this motif, the main theme, and other motifs reprised in clever ways makes even the more suspenseful tracks in the score fairly enjoyable listening - e.g. "It\'s No Deal" and "They Took Me".

There\'s also an attractive love theme for Eastwood\'s love interest, a woman equally consumed with revenge. We hear a bit of that dark side in the forlorn strings of "They Took Me", but Frontiere mostly manages to steer the affair toward sunnier shores, with a gentle theme for harmonica, strings, horn and vibraphone in "Rachel" and "Rachel (reprise)". If there is a weakness, it would be that both the "Hang \'em High" title theme and the love theme are both reprised - twice in the case of the main title - an unfortunate emphasis when there\'s a lot more to the score, and only so much here in the first place. While it would be great for this score to see an expanded, chronologically-ordered release one day, for those who\'ve never heard it, the content, and its presentation here, is strong, and for fans of the genre and the period of film scoring, it comes recommended.

For me the real joy of this album was The Aviator, Frontiere\'s score for the 1985 George Miller film, starring Christopher Reeve and Rosanna Arquette. I\'m not familiar with the film, which sounds like a mixture of Six Days, Seven Nights and The Edge, but the canvas of aerial action, crash landings, an awkward romance, and the constant threat of wolves seems to have given Frontiere license to dial in the kind of romantic orchestral score that film score collectors love the most. Aerial action has always been fertile ground for film music at its most inspirational, and "The Aviator Theme (Here we go)", while not quite Spirit of St Louis or The Blue Max, is certainly a fine entry in the genre.

As with the previous score, Frontiere\'s skill in manipulating leitmotifs comes through again. The main fanfare is deftly incorporated into the exciting action cues once the protagonists find themselves on the ground - the racing string, woodwind and brass figures in "Pole Wires / Old Man #1" a fine example. The action music is gripping stuff - "The Crash", "Wolf Pack" and "What You Need" being three particularly exciting examples. There\'s also an attractive love theme - for lush string in "Rabbit Hunt" and for woodwinds and strings in "The Cabin". In general, this is strong film music for a film that probably didn\'t deserve it - and its inclusion here (the CD premiere of the score, previously released on LP with two less tracks by Varese) is particularly welcome.

For those who needed any additional incentive to purchase this - there are also two tracks from Frontiere\'s rambunctious Barquero score. These tracks are closer in ensemble and style to Hang \'em High, though the tone is a lot more ebullient, and it\'s a pity more of the score isn\'t available, as it\'s great stuff. Overall, a fine release from a composer whose work goes unjustly neglected these days. Hopefully it\'s not the last Frontiere release we\'ll see from La-La-Land, who also released the composer\'s Brannigan a few years back.