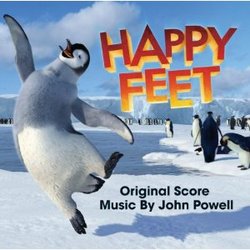 I stated in my review of the Happy Feet song album that I was looking forward to the score release. That was based on the score suite at the end of the album, which was quite good. That suite, however, was comprised of all the best parts of the score. While the score album is still enjoyable, it is not one of John Powell's best (we are speaking relatively here) and I find his work on the Happy Feet songs more interesting. That is not to say his score is not good—it is very unique and uses myriad tricks from Powell's playbook to create a very cool comedy score. I like pretty much anything Powell does, so my rating here is relative to his other works. Happy Feet is comparable to Evolution, Ice Age: The Meltdown, and Robots, to name a few, with bits of other past works too.

Happy Feet is a bit less cohesive than some of Powell's other animated scores. "Lovelace's Pile" and "In My Room" are two songs from the film that belong on the song album, as they interrupt the flow of the score. That having been said, this film was a good vehicle for Powell's multiple styles of composing to come through. The album opens with a strange, deep, resonating massive choir piece (Powell recorded a 600 member choir for parts of this score), but his unique percussion style comes in, followed by the orchestra. His bouncy style of comedy scoring comes in with the full orchestra in "The Eggs Hatch." A third style, which he used heard widely in Shrek and I Am Sam, is acoustic and this makes an appearance in "Birth of Mumble" and later in "The Hill." The middle of the album is comprised of a number of orchestral action cues, such as "Fish" and "Leopard Seal" but the score album begins to pick up its own tone with "Adelieland" and "Bob's Led." These two samba cues begin to give Happy Feet a character and style that set it apart from Powell's other works.

The samba cues were the main body of the score suite from the song album, "The Story of Mumble Happyfeet," preceded by "Birth of Mumble" and followed by part of "Alien Ships." While this suite gave me high hopes for this score, it does, in fact include all the best parts from the film. When listening to Powell's scores, I have come to expect some standout cue, such as "Mammoths" from Ice Age: The Meltdown. Happy Feet does not have such a cue. The second half of the album, beginning with the samba cues, has some very interesting parts, however. Two themes are introduced here, one is a rhythmic theme, heard at the end of the suite, where Powell uses a string line as percussion. This is heard in "Fun Food Storm" and "Alien Ships," but is mainly leading into the second theme, which is for the "aliens" in the film. Like Alan Silvestri's alien theme in The Abyss, Powell's theme comes in only toward the end and uses a large, wordless choir. This theme is first heard in "Finding Aliens," performed in full in "Alien Ships" and then reprised in "The Helicopter."

It is getting difficult to put a rating on John Powell's scores because one has to keep in mind the comparative body of work he has written, which it has to be compared to. While Happy Feet is a very unique score for an animated film, it is little new territory for Powell. It is a good score that complimented the film well, but took a supporting role to the songs, which are what Powell should be commended for on this film. For the score, Powell fans will enjoy it, but he has done better and I know there is better to come.