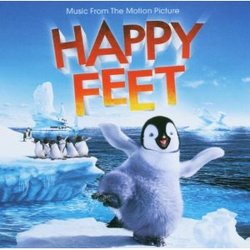 In January 2003, John Powell started work on a new project called Happy Feet. Have you ever seen a mass of penguins dancing? No? Me neither. But he has. This album is the first release containing his work, featuring the songs that are in the film, many of which he produced and arranged. A second album containing his score will be released in December. Like Craig Armstrong's work on Moulin Rouge, Powell had the task of arranging remakes of older songs to fit the film and, well, have the penguins dance to. The only original song written for the film is the first one, "Song of the Heart," written and performed by Prince. Some of the songs were not produced by Powell and are less interesting, such as the Beach Boys song.

What is nice to see about this album is that it is not "Music Inspired By" but actually all are songs produced for the film (even though a few didn't make it into the final cut). For the songs produced by Powell, they all strongly feature his unique style of orchestration with heavy, upbeat percussion; the seven songs he worked on are easily distinguished from the others. Two Stevie Wonder songs, "Tell Me Something Good" performed by Pink and "I Wish" performed by Fantasia, Patti Labelle, and Yolanda Adams, for example. The latter contains the most prominent Powell percussion style and is a fun gospel style song with the three divas belting out the lyrics. They are backed by a choir, which may not sound overbearing, but that is all in the mixing: Powell recorded a 600 member choir for this project!

"My Way (A Mi Manera)", which many people have already heard in the teaser, is the song performed enthusiastically by Robin Williams. I find the Latin/flamenco style in this film hilarious just given the polar setting. Powell dabbled in this sound in The Road to El Dorado, for which it was a bit more appropriate, but they are clearly going for a comedic song here. This style is also briefly featured in Powell's score suite at the end of the soundtrack. Nicole Kidman and Hugh Jackman sing a "match-up" song, featuring Prince's "Kiss" and Elvis' "Heartbreak Hotel". Jackman has a smaller contribution, and his Elvis impression is quite good, but I would like to have heard more of his voice, as I am told it is quite good when he's not roaring as Wolverine.

Brittany Murphy sings on two tracks, which are surprisingly good as well. Both produced by Powell, they are nearly backed by his score rather than being stand alone songs. "Boogie Wonderland" includes the "Adelie Rap/Adelie Bridge" performed by the Adelies, which includes Robin Williams; this portion was co-written by Powell as well. Finally, k.d. lang appears in her second film of 2006 after a brief cameo in The Black Dahlia. She lends her voice to Happy Feet for the cover of the Beatles "Golden Slumbers" and "The End." This song was not produced by Powell, but lang's version of the Beatles song is very good.

Suites of John Powell's scores are generally just a tease, because some of the best parts to his music are found in short cues for random scenes, such as "Mammoths" from Ice Age: The Meltdown, and I feel that nearly complete scores are needed to really appreciate his work - but I tend to think that about most scores. The point is, we're in luck because he is also releasing a score album next month. But, "The Story of Mumble Happyfeet" gives us a brief taste of his score. It is basically 4 different parts: a bouncy, acoustic cue; a jazzy, samba cue that includes the 600-person choir shouting "Mambo!" and organ; a very up-tempo Latin cue with a soaring trumpet solo above the heavy percussion; and then a more serious, dramatic cue. This last part encompasses the final two minutes of the suite, and really makes me long for the score album. A horn line plays over the percussion with a backing string line in the tone of some of John Powell's Ice Age: The Meltdown cues. TThe massive choir comes in toward the end, bringing the album to a great close and making one look forward to the second album in December.