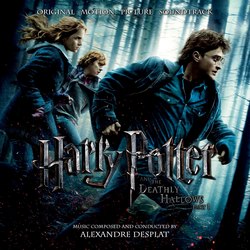 When director David Yates decided that Harry Potter and the Deathly Hallows would be split into two movies, many presumed Nicholas Hooper would continue his collaboration with Yates, and thus achieved the distinction of scoring more Harry Potter movies than any other composer, passing John Williams, who scored three. Nicholas Hooper however declined to return, and French composer Alexandre Desplat was hired.

Himself a fan of Williams, Desplat stated that he would "take every opportunity to use the fabulous [Hedwig's] theme" if the footage allowed him. "Hedwig's Theme" is incorporated to a greater extent in this score than Patrick Doyle or Nicholas Hooper had achieved. We also hear music that hearkens back to Williams' "Polyjuice" transformation material from Chamber of Secrets in "Polyjuice Potion" (Track 3). The bouncing woodwinds in "Detonators" (Track 11) are reminiscent of the medieval sound Williams achieved in Prisoner of Azkaban and the melody even reminds one a little of "Double Trouble"!

The theme from "The Obliviation" (Track 1) is the film's main theme that expresses the loneliness and loss of innocence felt by the main characters who are far from all that is safe and familiar to them. A great example is heard in "Ron Leaves" (Track 14). A noble theme for the Order and Harry’s friends, or the "Band of Brothers" as Desplat refers to them, is heard in "Polyjuice Potion." The ominous theme for evil is heard in "Snape to Malfoy Manor" (Track 2).

Other minor themes or ideas include a strutting string march in "Ministry of Magic" (Track 10), a quirky mandolin theme for the house elf in "Dobby" (Track 9), a theme for Dumbledore, and an eery, mysterious theme for horcruxes in "The Locket" (Track 12).

The album gives the score a chance to shine since, in the film, many times the music is buried under dialog and sound effects. The latin-inspired "Lovegood" (Track 21) wasn't used in the movie and sections of "The Will" (Track 7) and "Hermione's Parents" (Track 18) also weren't used.

Desplat's score for Deathly Hallows: Part 1 is a fantastic blend of action and suspense for an epic journey and the quirkiness and playfulness that accompanies the idea of wizards, potions, brooms and magic. Wonderfully diverse, thematiacally interesting, and brilliantly sophisticated, this score is a superb addition to the Harry Potter scores.