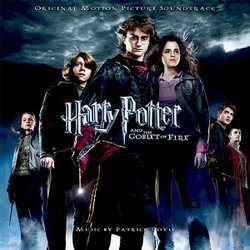 Harry Potter and the Goblet of Fire

Review: Harry Potter and the Goblet of Fire

Another Harry Potter film is upon us, and this time, the dangers that Harry is facing is even greater than ever. In Harry Potter and the Goblet of Fire, he\'s having bad dreams about Voldermort, who he believes to be making a return, and on top of it, someone is setting him up. He\'s been entered into the Tri-Wizard Tournament, a series of three increasingly dangerous tasks - and he can\'t seem to get a date for the Yule Ball. Composer John Williams had provided the score for the first three Harry Potter films, but for this round, Patrick Doyle has stepped in.

Mike Newell\'s direction is solid, but with Goblet of Fire being the longest of the Potter books, and the film only running 2.5 hours, there were a lot of subplots that were dropped. As a result, the film has a very simple plot, with a few major set pieces tying it all together. The resulting score that Doyle provides is a dark and energetic effort, but it - like the film - doesn\'t live up to the high standard set with last year\'s Harry Potter and the Prisoner of Azkaban.

Doyle\'s work is dark and ominous, filled with brash horns, dramatic chords, and stirring energy. From the opening cue ("The Story Continues"), in which Doyle also presents a minor version of Williams\'s "Hedwig\'s Theme", the tone of the next 75-minutes has been established. "Foreign Visitors Arrive" is one of my favorite cues on the album, as we hear a version of "Hedwig\'s Theme" as Harry and his friends arrive at school. This is followed by a Debussey-styled melody for the Beauxbaton team, and a stirring Wagnerian motif for the Bulgarian team from the Durmstrang school.

The action in the score is evident in cues like "The Dark Mark", "Harry Sees Dragons", "The Black Lake" and "The Maze". Ominous drama in "Sirius Fire" and "The Goblet of Fire" is offset by the emotional cues that Doyle wrote. "Harry in Winter" is the best one of those, providing a love theme for Harry that shows up a few times, including a great moment during the climax, in "Voldermort". "Rita Skeeter" is a light and flighty cue, that plays off of Miranda Richardson\'s playful performance.

There are also "source" cues that appear within the film. An Irish jig is followed by pounding percussion and male vocals in "The Quidditch World Cup"; "Neville\'s Waltz" is heard on a record player before growing into playful underscore. "Hogwart\'s March" is heard before and after the Maze sequence. The last three tracks on the album are songs by Jarvis Cocker, and all appear performed on-screen in the film, but don\'t add too much to the album - but they are rather unique additions to a Harry Potter soundtrack. After all, these are teenagers, and when they have a formal dance, there is sure to be rock music. It\'s not a period film!

Doyle has done a very good job with the soundtrack to the film. Unfortunately, many times his music is buried beneath sound effects, and some cues ("Harry in Winter") are even cut off abruptly. At least they are given an opportunity to shine on the album - but when held up to the stellar work that Williams has done in the past three films (especially Azkaban), it just doesn\'t quite deliver.

Doyle had an opportunity to work with some strong themes established in the previous films, and in the end, only hinted at "Hedwig\'s Theme" a few times. I\'m all for him branching out on his own, to set his own style, but in the end, the score - while enjoyable to listen to - doesn\'t deliver the goods that it could have. It might sound like I\'m being way too critical, but Doyle has written an excellent score. But the soundtrack, as well as the film, is just not what they could have been.