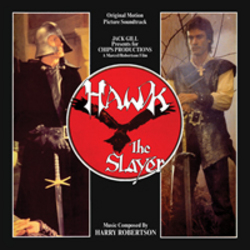 For Hawk the Slayer, Harry Robertson chose to write a bright and modern score, infusing a traditional orchestra heavy on strings and brass with synthesizers and electric guitar, with plenty of nods to the composer's own favorites: Bernard Herrmann, Jerry Goldsmith, Quincy Jones, Ennio Morricone, and John Barry. While the aesthetic of the film was to emulate Kurosawa in terms of camera angles and direction, Robertson thought of the film as a Fantasy Western while he was scoring it.

The booklet contains liner notes written by noted author Randall D. Larson. In addition to the original album program of Hawk the Slayer, we have included a new performance of the classic theme by composer Dominik Hauser.

Hawk the Slayer is a limited edition release of 1,000 units.