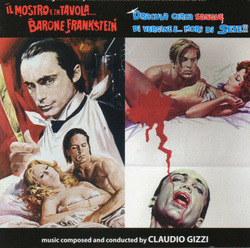 Digitmovies presents on a double CD set the complete OSTs from the movies realized by Paul Morrissey, one of the top directors of "Andy Warhol's factory" - with a marginal contribution from our Antonio Margheriti, who seems to have signed the movies only for contractual reasons. Dracula Cerca Sangue di Vergine ... E Morě di Sete!!! (aka Blood for Dracula) and Il Mostro E In Tavola ... Barone Frankenstein (aka Flesh for Frankenstein) were both shot in Italy, almost at the same period between 1973 and 1974, with almost the same cast for both movies. Udo Kier appears both as Dracula and as Baron Frankenstein, and Joe Dallesandro also gives two different performances.

Claudio Gizzi is a composer and keyboard player, previously a member of the progressive bands Automat and Omni, who is best remembered for his performances and arrangements for the movie Che? directed in 1972 by Roman Polanski (issued on LP Cinevox MDF 33/63). At that time ('73-'74) neither a 33 rpm nor a 45 rpm record of the two OSTs on this double CD was issued, and only in 1982 did Varese Sarabande release two albums with the titles Blood for Dracula (STV 81156) and Flesh for Frankenstein (STV 81157). In 1993 RCA issued in its OST series a CD (OST 119) with a total time of 64:55 which contained selections from both scores (some tracks on the American albums differ from the Italian CD, for example in the latter one the music—based on M°Gizzi' s elaboration of the Ouverture from Wagner's Tannhäuser—for the creation of Frankenstein's monster is missing, but instead available on the old Varese LP (here Tr.21).

For our double CD set project we could get access to the stereo master tapes of the complete sessions which not only gave us the chance to re-create the track list of the previous Italian CD (out of stock for a long time) with a far superior sound thanks to first generation tapes, but also to discovering much unreleased music (almost an hour more than on the previous RCA CD). CD 1 ( 73:23)

For Il Mostro E In Tavola ... Barone Frankenstein Claudio Gizzi has written a dramatic and mysterious motif introduced in Titoli di testa (Tr.1) and reprised in Tr.25,Tr.26 and in Tr.35 (the long version of the Main Titles), whereas for the character of Frankenstein the author has composed a sweet and sad classical adagio–like theme for piano, harpsichord and orchestra (Tr.2,Tr.13,Tr.15,Tr.34) that highlights the human side of the monstrous creation. The famous story is musically well accentuated with sometimes dissonant and macabre passages (Tr.4,Tr.9,Tr.12,Tr.14,Tr.20,Tr.30), whereas others have a pastoral flavour (Tr.3, Tr.5, Tr.6, Tr.10, Tr.17, Tr.22) or magic and romantic atmospheres (Tr.11,Tr.16,Tr.33). CD 2 (49:31)

For Dracula Cerca Sangue di Vergine ... E Morě di Sete!!! Claudio Gizzi has written one of the best themes related to the Dracula figure created by Bram Stoker (without forgetting the symphonic scores written by James Bernard for the classic British Hammer movies during the '50s,'60s,'70s, the ones by John Williams for the 1978 theatrical version and by Wojciech Kilar for the 1992 version), a sweet and at the same time sad motif for piano (played by the composer himself) and orchestra introduced in Titoli di testa (Tr.1) and then reprised in Tr.3. Tr.8, Tr.13, Tr.17, Tr.19, Tr.22, Tr.24, Tr.26,Tr.28,Tr.30. In contrast to this nostalgic theme the composer has created dramatic and scary orchestral passages (Tr.5, Tr.9, Tr.12, Tr.14, Tr.15,Tr.16,Tr.21,Tr.29) which get alternated with bucolic atmospheres with an Eastern-European folk flavour (Tr.2, Tr.4, Tr.6, Tr.10, Tr.11, Tr.18, Tr.20) and source music such as old-fashioned dance floor music (Tr.7) as well as its film version with the effect of an old gramophone (Tr.23).

A double CD set (TT 122:54) which wants to be a proper rescue and preservation of two first-rate music scores and is devoted to all aficionados and completists of the horror genre and of its soundtracks.