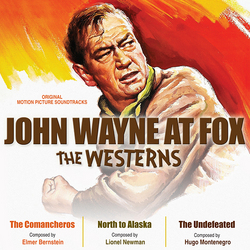 John Wayne at Fox: The Westerns

The Comancheros is a wonderful film with colorful performances, gorgeous photography, and a rousing musical score by Elmer Bernstein. At the time, Bernstein had just written what would become one of the most iconic western scores ever, The Magnificent Seven. The Comancheros was his follow up western score, and it, like the film it graces, is colorful, bigger than life, and filled with action and adventure. You know what you're in for as soon as the first chords of the main title music begin, one of Bernstein's all-time classic themes. But the score is rife with melody and invention and Bernstein's music is as iconic and big as the Duke himself.

A year earlier, the John Wayne Fox western was North to Alaska, a big, sprawling comedy western. The score, credited solely to Lionel Newman, but containing music by several others, fits the film like a glove. It's got a tuneful title song by Mike Phillips, a nice song for Fabian called "If You Knew" and some fun original orchestral cues by Newman.

Next we jump to the third of the Fox Wayne westerns, the 1969 film The Undefeated. Hugo Montenegro's music for The Undefeated is big as all outdoors, with strong themes and a real sense of storytelling. As with many Western scores, there's a lot of Copland "Americana" as well as a stirring main theme, some great dramatic scoring, some Mexican-flavored cues and even a hoedown.