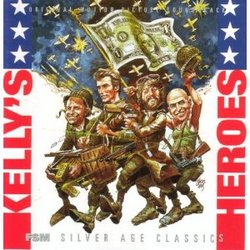 This is one bizarre movie.

Directed by Brian Hutton (Where Eagles Dare), Kelly's Heroes is mixture of a World War Two epic, a heist film and a late 60's anti-establishment movie all in a big blender that included Clint Eastwood, Telly Savalas and Donald Sutherland as the first Allied Forces Hippies. Such a weird two and a half hour epic didn't work at the box office at the time but the uniqueness which caused it to fail initially also turned it into a cult movie years later through endless cable airings. Lalo Schifrin wrote the score to this film, and as described above, it goes in many directions. However, with great skill, Schifrin managed to make a cohesive whole out of the material.

The "Kelly's Heroes" theme is a catchy Henry Mancini stylized march with a whistling chorus supplemented by military percussion and breezy horns even though "Burning Bridges" (a folk pop number sung by the Mike Curb Congregation) became the film's de-facto theme music. An instrumental version of "Bridges" was used on the P.A. system of Sutherland's tank in the movie. Another out of place piece is a "Battle Hymn of the Republic" cover with psychedelic guitar and rock orchestra in that way that can only be described as "late 60's". There's a country song by Hank Williams Jr. ("All For The Love of Sunshine") and even some comical Ennio Morricone references in "Quick Draw Kelly" (due to Clint Eastwood's image at the time as The Man with No Name).

Even with all of these references to other styles, there's no confusion that this is a Lalo Schifrin score. Numerous tracks like "More Gold" and "Mindfields" use suspenseful strings, xylophones, harps and muted percussion in trademark Schifrin fashion. Has any other composer ever utilized the cymbal so effectively? "Tiger Tank" delivers a driving bass drum pounding relentlessly that appropriately dramatizes the persistent opponent in the climax. These tracks weave through the other elements, playing counterpoint to the irreverence and creating a sense of danger to the proceedings.

This Film Score Monthly Silver Age Classics release includes both the film and original album versions of music, giving you about everything you could want from this movie. In trademark fashion, the linear notes are detailed and comprehensive.