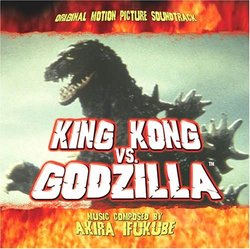 La-La Land Record\'s latest Godzilla release comes at an odd time of revival and departure; with interest generated by King Kong\'s CGI return to screens, the Honda Ishirô classic, King Kong vs. Godzilla (1962), makes a comeback on DVD, but in turn... the world loses a legendary music great. Ifukube Akira, responsible for the sonic birth and final death of the kaiju eiga\'s most famous villain, passed away in early February of this year.

If the name (Ifukube) has you drawing blanks, the very sounds heralding the destructive whims of Tokyo\'s infamous reptile should be more than sufficient to jog the memory. Although Japan\'s beloved nonagenarian spent the better part of his career bonded with Toho\'s cult phenomenon, he was a prolific composer - scoring well over two hundred fifty films, accomplished in the realm of concert works, a sound designer, and teacher. Ifukube\'s gift for creating memorable motifs caused many Westerners praise him as the John Williams of Japanese cinema, but any similarity between the two ends there. Much of Ifukube\'s works incorporate distinctive ostinatos due to Ainu cultural influences in his youth; this type of phrasing (also favored by Phillip Glass) is laden with Asian tonality and manipulated in such a way that music and picture can\'t help but become one. Whether it occurred in requiems, brisk martial pieces, or symphonic works, the altering of note duration for tempo change gave his themes dramatic substance. (Undoubtedly, his hidden gift for improvisation aided him there.) Whenever freedom of rhythm combined with pentatonic scales, eastern modes, and creative arrangements, the results were positively unique. In retrospect, Ifukube\'s music was an ideal match, and vehicle, for a sci-fi monster franchise fraught with megawatt battles and grandiose comebacks. His trademark blend of contemporary and traditional sounds is now available in the newly liberated album, King Kong vs. Godzilla. To the delight of fans worldwide, it\'s a rightful homage to the maestro of monster film.

This cult classic reintroduced Godzilla to Western audiences in a glorious, Technicolor clash with America\'s resurrected, King Kong (curiously made the same height as his atomic rival). Its bizarre success on both sides of the Pacific kicked off the extended phase of action-adventure absurdity in the Showa period of Godzilla works. King Kong vs. Godzilla strayed from the menacing tone of the first, Godzilla (1954), and turned commercial satire - although in the United States, it became a confused mess of B-movie proportions. The idea for the movie came from Kong\'s 1933 FX mastermind, Willis O\'Brien, but it was transformed when producer, John Beck, took over. Funding failures in the U.S. led Beck to Japan\'s Toho studios, and with the eventual greenlight, the King of Monsters was chosen to fight a less dramatic man-in-bad-monkey-suit. The audience turnout in the east was sky high, but how the overseas, lost-in-translation release could\'ve gained so much popularity is a mystery...

Behind-the-scenes Hollywood politicking, production pinballing, and presentational pruning eventually culminated in two different versions of the movie: a Japanese extravaganza and severely adulterated, Americanized bilge. (To interpret the remnants of post-WWII, political semiotics in either would be beyond pedantic.) Ape ownership belonged to RKO along with the Americanized film release; thus it\'s a relief that Toho had no part in the major plot edits that affected continuity, basic logic, and featured mind-numbing exposition scenes (all re-shot in the U.S.). But perhaps the worst thing to happen - for audiophiles especially - was the swapping of Ifukube\'s score for spectacle-stunting stock music. (Copious audio details can be found in the liner notes.) The original soundtrack for King Kong vs. Godzilla now gives listeners what they\'ve craved for so long: over an hour of thirty-three, in-stereo, electrifying cues, bonus tracks, and comprehensive booklet all in a picturesque package.

As stated earlier, Honda\'s version was satirical at the core, but there were semi-serious moments. You only have to listen to know that Ifukube balanced the humor with exquisite gravity; in the pulsing "Main Title", there is a terrible, gripping urgency that signals the end of the world, or a great impending doom. The sinister piece is a pounding, choral chant bolstered by full orchestra; the primal performance and sheer weight of sound attack in waves of intensity. This awesome effect is stripped away in the American version, and replaced by a bland "luxurious" opening with some generic "oriental" stylings that convey... what? No one knows, but it becomes an utter chore to sit and wait for the ultimate battle to start - which doesn\'t occur until late in the movie.

It\'s clear that kaiju flicks require more than special effects to hold viewer attention, so when emotive chunks of the score are cut, many scenes that rely on the cues wind up flopping. There is a vivid scene in which King Kong must do battle with a giant octopus, but prior to the battle, the latter must emerge from black waters. The track "The Devil of the South Seas/Drums of Battle/Giant Octopus vs. King Kong" describes these events in a sublimely eerie way; waning horns and tentative, viscous strings announce the disquieting (slurping) approach of the sucker-covered fiend. The telltale experience is befitting and still as ghastly as it was when I heard it in childhood. Complemented by Ifukube\'s score, this scene could leave you with minor, psychosomatic quirks in later years, but the Americanized version doesn\'t titillate as much as it... sucks. The multifaceted realm of cinema is supposed to make you believe or experience what you see - however corny the effects, but the stock music renders this portion of the film almost unwatchable. Dawdling, bereft of feeling, and tedious, it\'s akin to viewing a nature documentary on the mating ritual of slugs, sans audio. What would normally be daunting close ups of the octopus become a confusing mass of slow-moving textures; they left me with too many questions: "What is it doing? Is it going anywhere? Wait, did anything happen yet? "

If you haven\'t seen the original film, you\'ll have wished you did after experiencing Ifukube\'s score. (Several notable tracks from the album went on to appear in the composer\'s symphonic arrangements, Godzilla 40th Anniversary, in \'93.) "Series of World Wonders" (nine seconds long), "The Sleeping Devil" (three seconds), and "Operation "Burial" Fails" (twelve seconds) were a few of the loopable cues that narrated the brief, but myriad scenes of unease and foreboding. Urgency and excitement often stemmed from the continuous hustle and bustle of human activity: a Sousa-esque parade march, "Great News Gathering Team Departure", and full-scale military tactics, e.g., "Preparations For Operation "One Million Volts"", "Operation "One Million Volts" II", "The Plan to Transport King Kong". (While it’s never illustrated by the music, the imagery of frantic, fleeing village/city folk is a given.) Due to shared screen time with Kong, Godzilla\'s own theme wasn\'t reprised nearly as often as it was in other works. But whenever it appeared ("Godzilla\'s Resurrection", "The Terror of Godzilla"), the unearthly presence of evil incarnate was unmistakable.

There are two tracks that don\'t belong to the maestro, the silly "Southern Island Tale" and unused "Fujita & Fumiko"; if anything, they are relevant fillers that added to the comedy of the film. The bonus tracks are renditions of the "Main Title"; the mono piece was used in the film, and therefore carries slightly more weight than the stereo version with less scattered vocals. The a cappella work is interesting, but oddly textured; the primeval force is obviously greater than that of the orchestral arrangement, but the phlegmy introduction and abrupt ending might leave some listeners hanging. (However, this is negligible when compared to the liner book\'s semi-dreary blow-by-blow, scene-by-scene recount of the original movie.)

Ifukube touched and inspired many for decades by bringing alive the grandeur of Godzilla. And given the insane time constraints on composers in Japan, i.e., three or four days to compose and record a full score, it\'s amazing that his deceptively simple compositions were able to convey so much. (One can\'t help but wonder how much of an influence he\'s had on prominent modern composers, Joe Hisaishi in particular, or Sugiyama Koichi and Uematsu Nobuo in the game industry.) Nevertheless, the standalone score might not be accessible to Western ears, or those lacking knowledge or appreciation of the monster genre, but you\'ll get it if you love kaiju eiga.