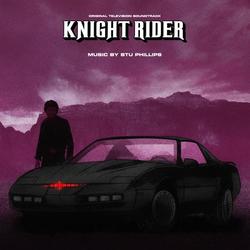 Varese Sarabande Records announces the release of the music from the beloved original 1980s television series, Knight Rider. The show ran for four years on NBC and made stars out of David Hasselhoff and his car, KITT. The series featured music by the great Stu Phillips. The series theme song is one of the most memorable and much-loved themes from any television series.

In 2005, Film Score Monthly released a single disc limited edition CD collection of music from the series, which quickly sold out. Our new expanded 2-CD set includes music from the limited release on the first disc, while the second disc features completely unreleased score selected by Stu Phillips. The album was supervised by Stu and features all new artwork and notes.