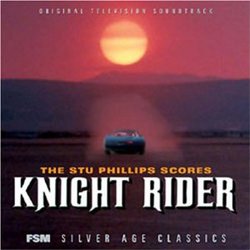 Although no cheesy 80s television is safe from the clawing hands of greedy executives plying upon the sad nostalgia of the aging hordes of Generation X, "Knight Rider", inexplicably, seems to be the target of an inordinate number of voodoo zombification rituals. "Knight Rider" (1982); Knight Rider: The Movie (1982); Knight Rider 2000 (1994); Knight Rider 2010 (1994); and now we\'re threatened with another possible movie in Knight Rider (2005). I realize The Hoff is the most watched person on the planet. No doubt aliens sifting through the wreckage of our civilization will conclude he was god our primitive species worshipped. But when is enough enough?

Apparently it\'s not enough until they\'ve released it on DVD and thrown out a soundtrack to boot.

I have a feeling that reviews matter very little to those considering the acquisition of this. You\'ve got your poster of The Hoff and were one of the 9 million people to buy his music CDs. You still secretly long for Pontiac Trans Am. There\'s no such thing as "too much cheese" and Stu Phillips\' "Main Title" (which I\'m sure you can hum from memory, even after 20 years) brings back memories of the happy days before your girlfriend put you on the Atkins diet.

Liking the Main Title is a good thing because you\'ll be hearing it a lot on these 40 tracks. It gets repeated. And repeated. It\'s not as if it is a dynamic composition to begin with. And after you\'ve heard it 3 times in the first 12 tracks it begins to wear a little thin.

The biggest weakness of this CD is that it requires a severe case of attention deficit disorder to appreciate the music. There are, nominally, 40 tracks. But many of these "tracks" actually combine two or more unrelated pieces of music. For instance, "track" 18 is only 1:32 long but features three distinct compositions. (One of which is a reprise of the main title theme. Yes. Again.) This brevity (and repetition ad nauseum of the main title theme) works when it is background music during the broadcast because scenes are short. But when you\'re just listening to the music the constant shifting and endless repetition becomes jarring and annoying. Just as you get settled into the rough and tumble "Fight in the Woods" you find that its allotted time of 59 seconds is up and you\'re thrust into "Kitt from Outer Space".

I guess the music just isn\'t as good when The Hoff isn\'t on screen saving a damsel in distress.