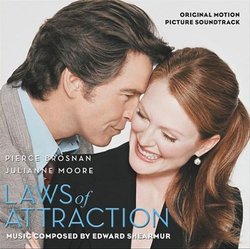 Romantic comedies, such as Laws of Attraction, can - and often do - get away with minimal to no score, many times relying on rock or pop songs spread out through the film for the musical accompaniment. The films are still funny and romantic. However, some composers take romantic comedies a bit more seriously and provide a full score for the film, which adds a depth to the characters on screen. Some examples include Hans Zimmer's Oscar-nominated As Good As It Gets, Trevor Jones' Notting Hill, and John Powell's Forces of Nature. Rarely do these scores, however, get commercially released.

Following suit, Edward Shearmur has provided a full, bouncy, Irish-influenced score for Pierce Brosnan and Julianne Moore's latest flick...a pleasant score, and it actually has a soundtrack release.  Shearmur has written some incredible music in the past few years, especially the militaristic Reign of Fire and the adventurous Count of Monte Cristo.  Laws of Attraction is alright - it is a good effort and compliments the film well, and is much better than the slew of eclectic remixes of unrelated songs that easily could have accompanied the film.

Shearmur uses piano primarily with light strings and woodwinds and the occasional acoustic guitar for the orchestrations. The music begins with a jazzy feel ("Chinatown"). However, the second half of the album features some really good Irish music, especially "The Castle" and "An Irish Tale". The music slows with "A Trip to Ireland", but breaks out into the Irish jigs throughout the latter tracks. "An Irish Tale" is definitely the highlight of the album, with a mix of the slow Irish flute and more upbeat jigs. This track also features a swelling string cue toward the end. Laws of Attraction is a good romantic comedy score and showcases Shearmur's versatility well. If you liked the music in the film, the album is definitely worth buying, but if you're looking for a fun Irish jig, Zimmer's An Everlasting Piece is more enjoyable. I prefer Shearmur's more adventurous efforts and will be watching for his upcoming score to Sky Captain and the World of Tomorrow later this year.