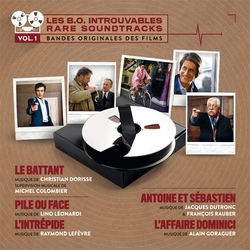 This first box set Rare Soundtracks – Volume 1 puts the spotlight on iconic actors (Alain Delon, Jean Gabin, Jacques Dutronc, Gérard Depardieu…), talented directors (Robert Enrico, Jean-Marie Périer, Jean Girault…) and brilliant screenwriters (Daniel Boulanger, Michel Audiard…). The five films presented here – mostly thrillers and comedies – may not be the most famous ones in their category, but they have the merit of highlighting a certain spirit, that of "quality" popular French cinema. Although they are not François de Roubaix, Michel Legrand or Philippe Sarde, they have been able like them to create very specific musical universes and to write melodies that deserve to be properly appreciated and valued.

The present 3-CD edition has been fully remastered from the session tapes and includes a 16-page booklet with liner notes by Nicolas Magenham.