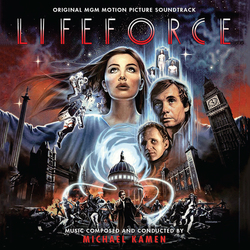 The 1985 Cannon-produced space-vampire thriller Lifeforce went through a myriad of changes before being released in the US. Its running time was cut down dramatically and Henry Mancini's original score no longer quite fit the new film's configuration. With Mancini no longer available to work on this new version, director Tobe Hooper brought in composer Michael Kamen to help add new score, often with a more contemporary use of synths, to the newly cut scenes. Most notably, Kamen wrote new music for the opening sequence to conform to the new edits, eschewing Mancini's driving, heroic feel with a more brooding, stormy orchestral approach with sharp orchestral stabs. It was an early example of Kamen's strong command of the orchestra and creating a strong sense of foreshadowing. It is a more gothic opening to the score that is a modern take on an old story.

This new 76-minute CD, produced with the Michael Kamen Estate, features Kamen's complete 14-minute orchestral score performed by the National Philharmonic Orchestra, mixed by Eric Tomlinson, as well as the 51 minutes of complicated, multi-layered electronic scoring used throughout and mingling with Mancini's score in the film. Those in turn are followed by two very cerebral cues intended for the initial two reels of the film, the second of which concludes with a series of chimes that trails quietly off into the darkness of silence. On its own it gives a very different and eerie take on the atmosphere of the Lifeforce film.

In Lifeforce, astronauts stumble upon a mysterious vessel in space that contains bat-like creatures and three humanoids. Brought down to England, the three humanoids aren't everything they appear to be, as noted when the female space vampire (Mathilda May) begins to suck the lifeforce out of everyone she crosses. Astronaut Col. Tom Carlsen (Steve Railsback) becomes psychically possessed by and obsessed with the femme fatale, who also has the gift of shapeshifting. That knack leads a team of scientists out to a psychiatric hospital on the moors, then back into a zombie-infested London where the city's siphoned life juice is being shot back to the vampire spacecraft. In the end Carlsen gets his ultimate consummation of desire, saving the planet at his own expense.