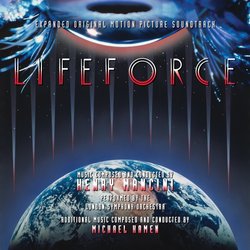 As detailed in the fine liner notes for this release by Randall Larson, Lifeforce had quite the tumultuous journey to the big screen in 1985, not the least of which concerned excising much of its original running time and music composed by the legendary Henry Mancini. At the time, the choice of Mancini for composer seemed unusual as he had not worked in this genre for decades and while a revered melodist, most of his success was achieved through straight dramatic fare or the comedies of Blake Edwards. The man was of course capable of much more and aficionados have always been aware of his early work in low-budget horror and sci-fi films of the 1950\'s, making his powerhouse score for Lifeforce a grand reminder for some and a marvelous surprise for others.

I initially became aware of this work through the main theme only, as a charging rendition performed by The Cincinnati Pops Orchestra had been included on a 1987 Erich Kunzel science fiction themed compilation. At a time when many soundtracks were out of print or simply unavailable, Kunzel\'s varied, well-produced albums helped many fans discover hidden gems outside of the Williams and Goldsmith canons. A few years later, Varese Sarabande issued a 37 minute version of Lifeforce, its contents now nestled into this new, deluxe 2-CD presentation of not only Mancini\'s complete contribution, but also the replacement cues composed by Michael Kamen. The first disc and the opening 13 minutes of the second focus on Mancini\'s complete score as written, while the remainder of disc two contains Kamen\'s music and the original album presentation, itself a fine summation of many of the score\'s best moments.

Obviously that charging main theme kicks off the album in a strong, adrenaline-pumping fashion, with its brass fanfaric idea augmented by a staccato string ostinato, here in shorter form than the expanded version written for the end credits. Next follows a lengthy, 16 minute tone poem full of both wonder and danger, essayed by sonorous strings, noble horns and murky woodwinds, then later joined by an ethereal female choir, all underscoring the discovery of alien bodies aboard a derelict spacecraft. There is an elusive, mysterious theme being developed here, much different from the direct, to-the-point main theme, which reoccurs throughout the score, briefly showing up in the next cue, "Rescue Mission", which also features some breathy, creepy synth vocalizations. "The Vampire Lives" opens with a high-pitched synth wail leading to a low woodwind motif then into large brass exclamations and more ominous textures. The aforementioned low woodwind motif turns up again in "Feeding Time", coupled with the breathy synth effects, and will reoccur later as well.

The noble horns from "The Discovery" suite return in "Carlson\'s Story", joined first by sympathetic reading from the strings, then moving into a pulsating section for staccato strings, woodwinds, angry muted trumpets and flourishing finish. Another strong dramatic highlight is heard in "Evil Visitation", while that elusive theme from "The Discovery" appears in mid-range flutes and oboes in "It\'s Immense". The high-pitched wail returns in "Let Me Go!" while "Anyone For Turns?" features churning tension broken by threatening brass chords. Large-scale action proceeds to dominate the last quarter of the score, from catchy, propulsive "London Burns" and "Call Of The Wild" on into the grand, bombastic finale on the second disc: the three "Web" tracks and end credits reprise of the main theme. Following on Mancini\'s heels are the atmospheric cues Michael Kamen penned for the recut and rejiggered version of the film. They tend toward linear, dissonant suspense, utilizing mainly strings and synths, augmented by some low end piano and horns, but overall are really far less distinctive and enjoyable as a listening experience. "After Autopsy" and "Hypnosis" do both feature a hypnotic, chirping little ostinato.

One of the other great surprises included here, though with some audible damage, is the film version of Mancini\'s "Grandson of Web", complete with choir, as heard in the opening cues of the score. And almost as a 37-minute bonus suite, the original soundtrack presentation rounds off the set, making this package a highlight of the year for fans of the score and specifically Mancini and Kamen. It represents a side of Mancini rarely indulged and woefully underused, seeing as how his composition is a memorable and strong as other classics of the genre by John Williams, Jerry Goldsmith and Elmer Bernstein. Perhaps its popularity would have increased if the film itself had not been butchered and allowed to find an audience. But then again, how wide of an audience can one expect to find when the plot concerns nude space vampires rampaging through London?