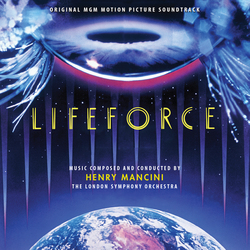 In 1985, composer Henry Mancini was able to return to his roots. The composer, most famous for his light, pop melodies like "The Pink Panther" and "Breakfast at Tiffanys," got his start scoring Universal B sci-fi and horror films in the '50s. And while Mancini was a star in pop circles, he always yearned to take on more dramatic projects. Lifeforce, the 1985 Cannon-produced film about space vampires with a unique taste for human souls, afforded him just such an opportunity - one which he embraced wholeheartedly with the power of the London Symphony Orchestra. It's driving, propulsive main theme (excised from the US print) kicks off what can be best described as a serious, symphonic work that provides a magnificent scope of mystery, terror and thrills, concluding with one of Mancini's most powerful endings. Mancini was so proud of his theme that he included it in his concert repertoire, feeling compelled to explain what Lifeforce was while looking at the audience and stating, "You didn't see Lifeforce."

For this new release, Intrada struck new transfers of the 1/4" Eric Tomlinson film mixes made at Abbey Road Studios and subsequently stored at MGM. Intrada created an all new complete program, retaining some of Mancini's envisioned assemblies. Two of Mancini's session rolls included a variety of individual instrumental effects created between the player and engineer. Some of these sounds are signatures that Mancini aficionados will recognize from his earlier classic suspense work such as Charade, Experiment in Terror, Arabesque and Wait Until Dark. These premiere on this release in the extras section.

In the film, after a space shuttle goes dark while investigating a mysterious spaceship hiding in the tail of Halley's comet, an investigative unit discovers the sole survivor (Steve Railsback) has protected three human-looking occupants of the spaceship. Once brought down to earth, these seemingly human characters escape, wreaking havoc on London, stealing souls and threatening all of human kind. The hunt is on to stop them before it's too late.