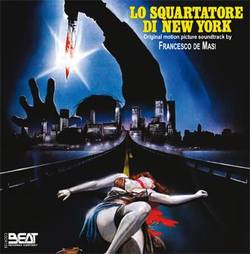 Among the various events celebrating the 50th anniversary of Beat Records, we are proud to announce this release of the expanded soundtrack from the 1982 cult classic Lo squartatore di New York by the late Italian director Lucio Fulci, featuring the beautiful music of Maestro Francesco de Masi. p>One of the historical titles in the Beat Records catalog, an abbreviated presentation of this soundtrack was released on LP and CD backed with music from Una tomba aperta, una bara vuota by Maestro Piero Piccioni. Now, one of the most incredible movie scores by this extraordinary musician can be enjoyed in its entirety. It's an intense, robust, modern and melodic score of extreme intensity. Standouts include "New York One More Day," a vibrant, action-packed rock theme, and "Fay," a sweet and melancholy orchestral theme where Oscar Valdambrini's trumpet and the harmonica of Franco Gemini alternate runs as solo instruments.

Finally available in its most complete form, this CD is filled with more than 70 minutes of music, including source music ("April Night" performed by Kiss Kream and "Nervous Tic" by the great Maestro Berto Pisano) and everything else that had been hiding in our archives for too long.