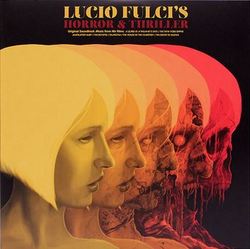 Essential release for completists and casual fans alike, this compilation features a host of classic Italian horror scores, all with one thing in common: director Lucio Fulci. The record features gorgeous album art by Randy Ortiz, and is pressed on 180 Gram Red & Yellow Vinyl, limited to 1,000 copies

This compilation features Fulci mainstay Fabio Frizzi—presented here with selections from The Beyond and Manhattan Baby, both of which rank as some of his finest work (and certainly his funkiest); Oscar winner Ennio Morricone, contributing selections from his sublime and psychedelic score to Lizard In A Woman's Skin, an utterly spellbinding listen that will send shivers down your spine; Walter Rizzati presents two cuts from The House By The Cemetery which has an incredible gothic feel of forboding. And who knew that the soundtrack to one of Fulci's nastiest films—The New York Ripper composed by Francesco De Masi—had such an incredibly funky Latin soundtrack that offsets the violence in the film and makes you want to dance like a duck?

Rounding out this 2 LP set are two scores that have NEVER been on vinyl before: Giovanni Cristiani's score to Demonia, a driving percussive-led score that is as moody as it is thrilling, dripping in synths and texture, and Franco Piana's Door to Silence,which offers up some pretty thrilling 70's jazz style cues soaked in brass and atmosphere. Big, bold and ballsy and definitely a welcome addition to the Fulci vinyl cannon.