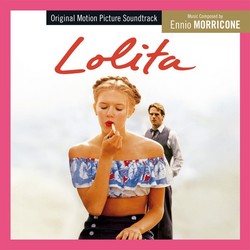 Music Box Records is pleased to present the expanded CD premiere of Lolita (1997), Ennio Morricone's classic score for Adrian Lyne's controversial adaptation of the Vladmir Nabokov novel. Starring Jeremy Irons, Melanie Griffith, Frank Langella and Dominique Swain, this version had to contend with the shadow of the earlier adaptation made by Stanley Kubrick.

Mastered by Claudio Fuiano, this new release by Music Box Records expands upon the original Milan Records soundtracks by omitting the period songs and adding more music by the Maestro. Highlights include different variations of the main theme and the "Requiescant" theme which features the guest performance of the Coro di Voci Bianche dell'Arcum children's choir. We are happy to combine this CD release with the celebration of Ennio Morricone's 85th birthday by offering a real Morricone classic finally getting the treatment it deserves!