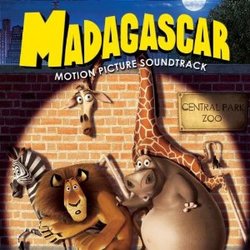 While Pixar movies feel like they are made by people who have had families and lived their lives, DreamWorks animated movies feel like they are made by bachelors. There isn't any emotional depth or resonance in the characters; they are simply ways to make one pop culture reference after another. Likewise, the album is simply a compilation of in-jokes. Sure "Hawaii Five-O," "Chariots of Fire," "Staying Alive," "Boogie Wonderland" and  "What a Wonderful World" are all great songs (no argument), but they are used solely as a funny free association. Even "Born Free" is quoted in the score. Personally, there should be a moratorium of Saturday Night Fever references.

What is the dramatic string that holds them all together? While the Shrek films similarly referenced lots of pop-culture, there was some semblance of unity in the selections that fit the film's emotional content. Here it is all about the jokes. And you can't have a "funny" album where all of the humor relies completely on remembering what happened in another movie. That said, the one standout track on this album is the hysterical "I Like to Move It" cover by Sacha Baron Cohen (aka Ali G). Cohen uses a goofy quasi-Indian/Jamaican accent to completely deconstruct this mid-90's house standard, and at one point he completely forgets who it is that should "move it" exactly. For a one-joke song, it gets a lot of mileage.

On the score front, the soundtrack teases the listener with a series of short Hans Zimmer cues, accompanied by his back ups James Dooley ("Whacked Out Conspiracy") and Heitor Periera ("The Foosa Attack"). It's a light, eclectic score that ventures away from Zimmer's typical sound ("Beacon of Liberty" uses some 70's funk while "Best Friends" has whistling and ukuleles). You never get to hear enough to get into it because each track is around two minutes or under.

This is fast food album. In theory it should fill you up, but it is over before you know it and leaves you feeling a bit empty in the end.