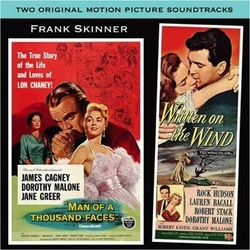 Man of a Thousand Faces / Written on the Wind

Performed by
The Universal-International Orchestra

Another long awaited CD premiere for two vintage soundtracks originally released by Decca in the fifties.

As with Imitation of Life, previously released on the DCM label, Man of a Thousand Faces may be considered a major opus in the long career of the discrete composer named Frank Chester Skinner. Here again, quantity and quality go together, the 122-minute movie offering an hour of music for large orchestra, conducted con brio by Joseph Gershenson. A gorgeous 41-minute selection was retained on the LP album.

One recognizes in Man of a Thousand Faces Skinner's propensity to draw inspiration from the classical repertoire, both for the arrangements and the melodies. This approach perfectly suits Joseph Pevney's black and white movie, which assumes a documentary look in recreating the life and career of actor Lon Chaney, from the silent era to the dawn of talking pictures.

On the other hand, the Written on the Wind soundtrack release filled only one side (22 minutes) of an LP, the music for this Douglas Sirk melodrama being more concise. Victor Young wrote the main title song performed by The Four Aces, whose melody is integrated into Skinner's incidental score without becoming too intrusive.

Both high quality analog recordings were restored using the most advanced digital technology to deliver the best of the two worlds. 12-page full color booklet.