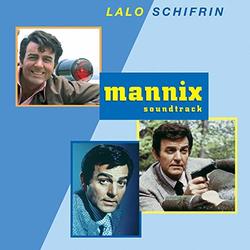 by David A. Koran December 19, 1999
4 / 5 Stars
Of all the T.V. soundtracks I would have expected to ever be released commercially, the last one I could have guessed would have been Lalo Schifrin's Mannix. That's not to say that is necessarily a bad thing, in fact, it's quite the opposite, a gem from the late1960s has been rediscovered and brought to the masses. The score to Mannix was the proto-music for all the television cop-shows that would follow it. For those who listen to this music and sense a familiarity to a theatrical release, you wouldn’t be too far off. Schifrin, in 1968, a year after Mannix scored Bullitt, known to many as one of actor Steve McQueen's finest films and contains one of, if not the best, car chase sequences ever filmed (and underscored).

Schfrin's first love of jazz injects the music here with an unmistakable sense of cool and sets up a groove that is carries from piece to piece on the CD. It's not the be-bop, fusion, or the real hokey jazz that most people associate with the style, but more of a cool lounge sensibility about it. Most of the music is similar in some respects to the underscore present in many of the Mission: Impossible television episodes, fitting the time (the 1960s) and the type of person (private detective) in the show. As mentioned in the liner notes, and definitely noticeable by any music aficionado, is the odd shuffle/waltz rhythm used for the main theme (appearing in a long and short for on the CD). Being a former trumpet player, I also like the use of the small brass section to give the theme just the right punch without overbearing it, all around cool.

The CD has a good selection on themes, keeping the length of the overall CD just about right, actually wishing there was more music. One piece I think could have been omitted was the bonus track, "Mannix Mixdown," a 90s-a-fied version of the Mannix theme, over synthesized and just plain ruined. Being a purist, I may sound a bit harsh, but after the other 95% being great, this last 5% just makes you wonder…why? Anyhow, you can program that out of your usual playing of this great CD, Schfrin fan or not.